A Review of the Pilot Metropolitan Fountain Pen

First Impressions (8)
This pen looks very nice for such a low price. I use the word classy to describe pens a lot, but classy certainly fits this pen. A formal-looking pen at a low cost is typically something found with Chinese pens (Baoer, Hero, etc.), so, coming from Pilot, this is surprising (in a good way). 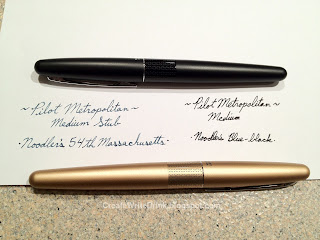 Appearance (9)
Inspecting the pen closer, I am impressed further by some things and not as impressed by other things. Capped, the whole pen looks solid, slick, and subdued. Even on the gold-bodied pen, the black center band contributes to the look, rather than appearing to break up the design. Additionally, the option for nine different looks is very impressive. (There are three, matte body colors: black, silver, and gold; and there are three center-band designs: plain, zig-zag, and dots.) I can only speak to the zig-zag center-band design, but it looks cool and slightly art deco (which is exactly why I chose it). 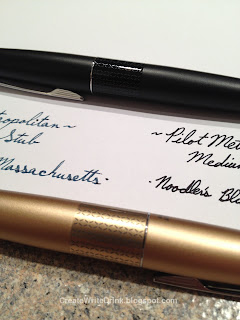 Design/Size/Weight (8)
The part that impressed me less, when I inspected the pen, definitely had to do with the design of the grip section, foremost. Compared to the rest of the pen, it looks and feels a bit cheap, though I know it is a solid plastic, probably the same material from which the Pilot Penmanship, Plumix, and Pluminix pens are made. The cap posts nicely, though loosely, but it snaps onto the body quite firmly. I have never been concerned about it coming off. On the gold Metropolitan, there was one point at which I went to remove the cap and the barrel came detached from the center-band, but this may have been on account of a lack of adhesive, as my black Metropolitan has not had this issue. I suppose this shows how firmly the cap attaches to the body, though removing the cap is not difficult by any means. I would think that other metal objects (like keys) could scratch the body, but I have not tested this (intentionally or otherwise). That being said, scratching is a potential problem for nearly every fountain pen that I own, so it is not a major factor for this review. 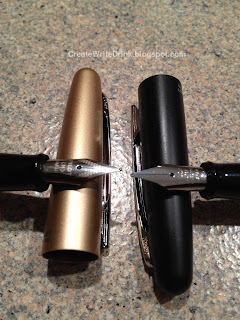 Nib (10)
Thank you, Pilot, for using your standard feed design and nib size, thus making it easy for us to have other nib options, even when you do not offer them for this pen! In terms of the medium round nib that came with the Metropolitan, it is very reminiscent of my Lamy fine nib, in terms of width and smoothness. The nib also has an engraved design, which is something lacking on the Pilot nibs of less expensive Pilot pens, such as the Penmanship, Plumix, and Pluminix. The engraving is not so prominent as that on the nibs of the Pilot Custom series, but its existence is surprising, considering the lack of engraving on Pilot Prera nibs (that I have seen). Having use the medium round for a while and then swapped it for the medium stub from a Plumix, I love the versatility. Along these same lines, I also wanted to mention how easy it is to perform this swap, even for those, who are not very familiar with pen assembly, thanks to there being only one way/position in which the nib can be seated on the feed.

Filling System (9)
While I cannot speak to the use of the Pilot CON-20, CON-50, or CON-70 converters in the Metropolitan, this pen does come with a converter and can accept Pilot proprietary cartridges. I think that the cartridges may hold slightly more ink than the converter, and, considering the sturdiness of the Pilot cartridges, washing them out and reusing them is an easy task. The converter that comes with the Metropolitan is less than impressive from an aesthetic viewpoint, but, since this pen is not a demonstrator, the look of such a converter is hardly important. I, personally, like to be able to see how much ink I have remaining, even if it requires unscrewing the body. My use of the converter was easy and had no problems; it was simply a matter of personal preference that led me to reuse cartridges, instead. 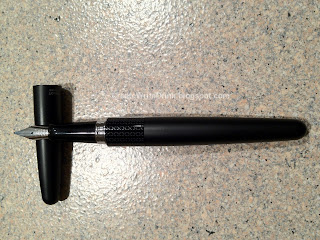 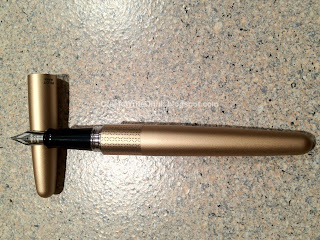 Cost and Value (10)
The cost for the Pilot Metropolitan is one of its greatest selling points. A pen like this could easily be priced at 20 USD or higher, yet the retail price of 15 USD “seals the deal,” so to speak. Performance of this pen has never been an issue for me, it looks very nice, and the construction is quite admirable for the cost. 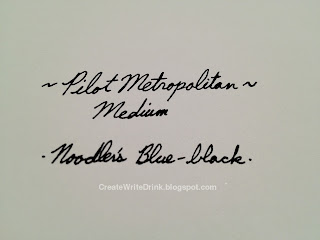 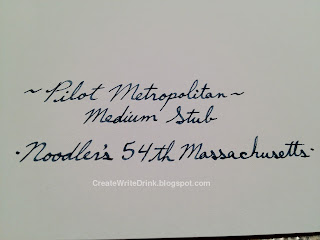 Conclusion (9)
After using this pen for some time, I think that it absolutely stands, as a contender, for one of the best, quality starter, fountain pens on the market right now. Lamy Safaris have always been a very solid choice, and I do not believe that the Pilot Metropolitan will replace the Safari. Rather, I think that both pen styles will continue to thrive, appealing to different individuals, based on their personal preference for look and feel. I highly recommend the Pilot Metropolitan.

This review was neither solicited or compensated. Please feel free to post questions or comments!