Nathan Tardiff, at Noodler's Ink,  attempted, and succeeded, in recreating a fountain pen ink that paid tribute to the brilliantly bright blue inks of the American colonial period. While the technicalities of chemical composition and paper interaction are more easily explained by another author, I shall suffice it to say that Baystate Blue, as well as the other inks in the Baystate series, were created to be waterproof and a modern day version of a vintage ink. According to his website, Nathan Tardiff has crafted this ink in such a manner that it is much less acidic than inks of the era on which it is based. 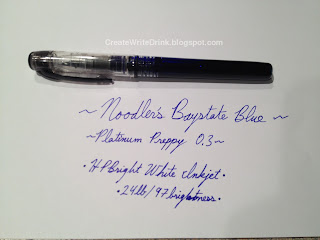 However, this difference in chemical composition comes at a slight cost (to some). For those, whose interest lies in mixing inks and custom-crafting their own colors, this ink is not chemically compatible with others, outside of the Baystate series. The reader may say, "That is no big deal...why all of the controversy?" Most opponents of the ink claim that it clogs pens, destroys pens, and stains pens (and everything else). However, after further research, it would appear that those clogs are actually the result of mixing Baystate Blue with a non-Baystate ink...something about which Nathan Tardiff at Noodler's specifically warns. The destruction of pens relates to the melting of parts in some Asian pens. The chances of such happening to a pen of quality are slim, yet there was a case in which some Lamy feeds were damaged by Baystate Blue (this problem with Lamy feeds has since been fixed). The staining, like the damaging, is, also, on account of the chemical makeup. Yes, this ink can stain your pen. Yes, other inks can do the same. Yes, this ink has a higher chance of doing so. Yes, people have been successful, after various trials, at removing such stains. Is it worth the cost of, perhaps, dedicating a pen for this ink? Please, read on. 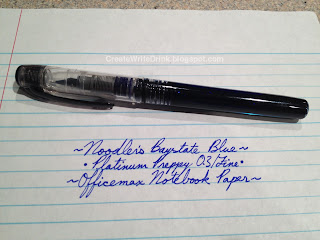 Now we come to the plus side (aside from the fact that it is waterproof): the color. I, personally, have never seen a more vibrant blue. I would compare it closely to cobalt, yet it has a level of saturation, intensity, and electricity, the likes of which have not crossed my path (crossed my pen?) in my, admittedly, limited time with fountain pens and inks. 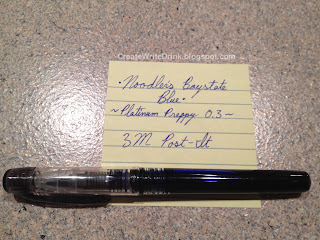 My recommendation is this. Unlike some fountain pen inks, Baystate Blue does not shade, and it does not look much different in photographs, than in real life, with the exception that photographs tend to reduce the intensity of the color. If you think that you would like a very intense blue and think that it would be something of regular use for you, try it. A good option may be to simply purchase the 4.5oz bottle. While this is quite a bit of ink, it comes with a free, eyedropper-converted Platinum Preppy (with both fine nib and rollerball tip). I can think of no better pen to test Baystate Blue than the Preppy. It is inexpensive and no great loss, in the case that it is damaged (though my own Preppy has sustained no damage from its time in contact with Baystate Blue).  This large bottle also comes with an eyedropper-fill brush pen for those more interested in the use of Baystate Blue for art or certain calligraphies. If the cost of purchasing such a large bottle is daunting or prohibitive, I would maintain that, buying a sample of Baystate Blue and including an eyedropper-converted Platinum Preppy in your order, for testing purposes, is your best option. While I bear no affiliation to The Goulet Pen Company, they offer the choice to have your Platinum Preppy pre-converted to an eyedropper-fill, when you buy it from them. Other companies may not have this option, but the conversion of a Platinum Preppy to an eyedropper-fill is very easy. There are several guides on the internet for doing so, including this one, written by me. Other good options for Baystate Blue test pens, depending upon your desires for the nib, include eyedropper-converted Pilot Penmanship and Pilot Plumix pens. (Eyedropper conversion guide located here.) 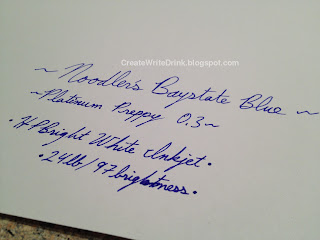 The bottom line, in my opinion, when dealing with any of the Baystate inks, is to have a pen with which to test it. You may find that you wish to keep that pen always inked with one of the Baystate colors. A $4.00 Platinum Preppy, stained by Baystate Blue, is a much lighter load to bear than the accidental staining of the feed of your favorite high-dollar pens.

Feel free to post any questions or comments!
Posted by Spencer at 8:51 AM