A Review of the Jinhao x750 Vertrag Fountain Pen 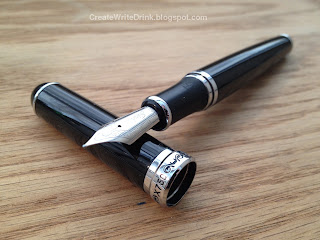 First Impressions (7)
The elegant simplicity of this pen is impressive, and the simple, black lines are very sleek. The slight taper at the end of the barrel is a bit odd/out of place, as is the silver accent ring at the end, whose raised surface appears to serve no purpose.

Appearance (8)
In this pen, just as they did in the Jinhao #159, Jinhao seems to be channeling their inner Montblanc, using silver clips, barrel rings, and section fittings to offset the shiny, black fields that are the surface of the pen. While not quite as giant as the #159, this x750 still looks big and is quite a long pen (as long as a Lamy Safari, almost exactly). The nib appearance must be mentioned - it looks positively massive. However, this mirrors my past experiences with Jinhao nibs (at least, in the case of the #159. The Century had a much smaller, two-tone nib).
Note: The wear on the grip section is from use, not the default look. 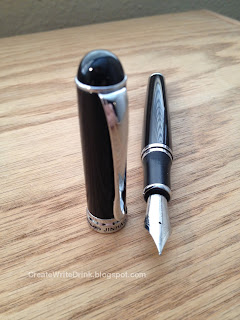 Design/Size/Weight (7)
Being mostly made from some sort of plastic with metal accents and fittings, this pen has some significant heft to it. In addition, the grip follows the design of the body and is relatively big and thick. This is probably not a good pen for people with small hands, though I cannot personally speak to the truth of this statement.
The black engraving on the cap band is clear and flawlessly done, subtly complimenting the design of the pen, rather than distracting from the overall subdued design. The clip is designed to be hefty, and it could probably withstand being clipped to a pocket were it not so tight. This brings us to my least favorite aspect of the pen: how the cap is seated. First, the cap snaps onto the body in a manner that can only be described as difficult to cap. Once the cap has been applied, it holds to the body with a death grip, requiring significant force to remove it. While the concept, here, is admirable - to design the pen so as to prevent idle uncapping - this pen takes that too far, assuming that it was ever actually part of the design, intentionally. Cap woes do not end there. Another struggle would be reached by those who seek to post the cap. Posting is something that I, personally, do not do, preferring to hold the cap or set it near my writing surface. However, in my attempts to post the cap, I discovered three things. Remember the raised accent ring on the end of the barrel? First, I further confirmed that it serves no functional purpose, such as holding the cap in a posted position. Second, it appears that the only way to firmly post the cap is to jam it, as far down over the end of the barrel, as possible. Third, any other attempt to post the pen results in a loose cap that throws off the balance, in my opinion, while holding it. 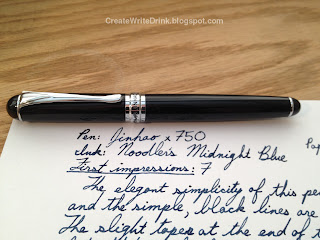 Nib (8)
The nib is huge - there is no other way to say it, yet its medium width is not much narrower than a European medium. In part on account of the feed design, this nib is a very wet writer, which can lead to some spread on various paper. Overall, the nib is quite smooth for not being high-priced.

Filling System (9)
This pen is a standard cartridge converter. Unlike some Jinhao pens, which come with very cheaply-made converters, this one’s converter is a very solid and non-flimsy plastic. The use of standard international cartridges (long or short) in this pen is a plus, in my book, versus the use of any proprietary cartridges. Overall, a well-designed and well-chosen option for the filling system is used. To access the cartridges or converter, the barrel is simply unscrewed from the section. Also, the barrel is long enough to store a second, short, standard international cartridge, if desired. 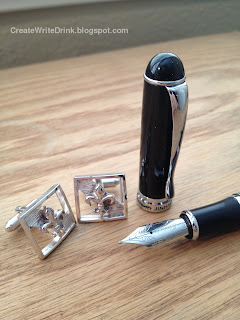 Cost and Value (6)
It should be noted, for clarification, that this x750 is the original Jinhao version and not the modified and re-branded Bulow version, as sold by xFountainPens.com/Paramount Goods, LLC. While I do not feel that the approximately 15 USD for this pen is extravagant (the pen certainly has solid construction and decent quality to it), it may be about 50% more than the pen is actually worth.

Conclusion (8)
(7.5 actual score)
In closing, I can really only see two very broad situations under which the purchase of this pen would be a good idea. The first is, if you are wanting to try a pen by Jinhao. This and the Century (also by Jinhao) are good-looking pens that should provide a decent writing experience with little adjustment of the nibs. This leads into the second scenario, where you are looking for a fairly inexpensive pen. In this area, Jinhao certainly provides, while also making their pens very functional.
Despite the use of proprietary cartridges, I think I would recommend the Pilot Metropolitan over the Jinhao x750 for a classy-looking pen at approximately the same price point. The nib versatility of the Metropolitan wins over the cartridge and converter difference, and the Metropolitan carries slightly more consistent performance than this, the Jinhao x750. 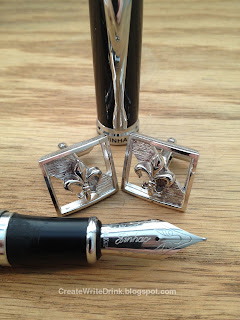 This review was unsolicited and uncompensated.
Posted by Spencer at 10:00 AM