Today's tea review touches on an offering from Numi, a tea company specializing in organic, bagged tea offerings. They have a wide distribution among hotels, and I acquired this bag on a recent business trip. 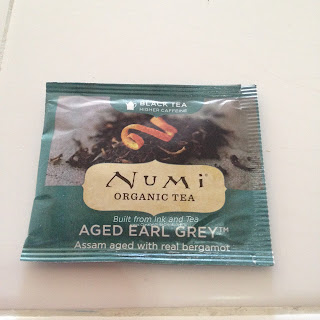 Initially, the name struck me. My familiarity with aging teas has been limited to pu'erh, and the general rule is that most teas do have a shelf life. They can be consumed past that period of time, but it should not be expected that their freshness of aroma or flavor will still be present. Subsequently, describing a tea as aged, when it is not a pu'erh, was a bit of a red flag to me.

According to Numi's website, they make their Aged Earl Grey by aging "organic Assam black tea with real Italian Bergamot for several weeks so the tea absorbs the orange scent." I have to assume that this means they store the tea with actual bergamot oranges for several weeks, since the bergamot oil, blended with the tea, is permanently combined with it. Thus, it would seem that the aging process embodies more of an aroma-steeping than anything else. Tea does quite well absorb scents of any aromatic items nearby, so I can see the viability. 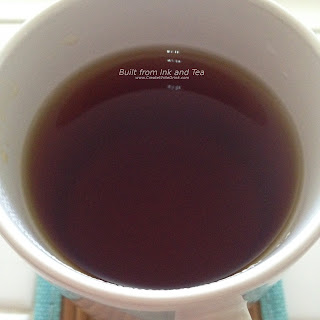 The aroma of the bagged tea smells heavily of bergamot. Unlike a tea, such as Stash's Double Bergamot Earl Grey, the scent is not heady or thick. Rather, it has a more intensely-fruity bergamot smell. Using just-boiled water, I steep the bag in eight ounces of water for five minutes, the upper end of what is recommended. The resulting cup shines darkly, albeit a bit murky. The flavors definitely embody an Assam, the maltiness blending okay with the heavy citrus. The bergamot, though, tastes bitter, not as fruity and smooth as it smelled. In fact, the more I drink, the less I notice the bergamot and the more I just taste Assam. This could in part be solved by an application of less steep time or a touch of milk. The aftertaste, sadly, is weak in flavor, even for an Assam. I feel as though this definitely results from the quality of the tea base, an unfortunate shortcoming of many bagged teas (though there are exceptions). 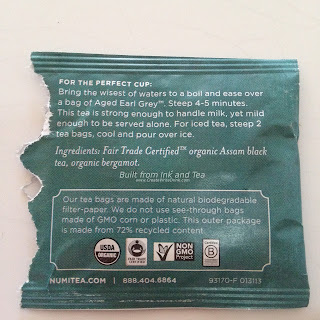 Except for an extra touch of fruitiness to the nose, this tea hardly seems to set itself apart from a standard Earl Grey. If you encounter it, give it a try, but otherwise I would not spend your time seeking it. On my personal enjoyment scale, I would rate this tea a 62/100.

Just a quick note to let you know that, due to travels, I will be taking a hiatus from posting here on Built from Ink and Tea, during the month of June, 2015. Expect new posts and content in July!

~Spencer
Posted by Spencer at 3:24 PM No comments:

Email ThisBlogThis!Share to TwitterShare to FacebookShare to Pinterest
Labels: update

Today, we have something a bit different - still an ink review but not a fountain pen ink! 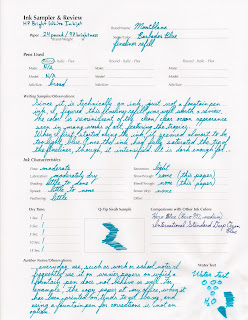 Here we have another tie guan yin by Grand Tea. These always interest me a great deal, as they have the potential to be so wonderful, and yet many companies' offerings of this style of oolong fall flat. As I open the package, I notice that this tie guan yin has a much more roasted aroma than the one that I previously tried from Grand Tea (the Monkey Picked Anxi Oolong). In fact, they are almost entirely opposite. That one was far more floral in aroma, and this one, initially, is more dark and roasted. At least so far as the dry leaves are concerned.

I preheat my gaiwan and my teacup, add some of the tea to the gaiwan, and give it a quick rinse. As I pour the water to begin the first steeping of thirty seconds, already I can smell the dark roasted aromas. If I take a deep breath, I can just barely detect an edge of grassy scents and a touch of floral notes. Steeping number one smells much the same, albeit watery and half-hearted. The liquor is bright and a transparent pale yellow. Tasting it, I find that it tastes much as it smells, which is to be expected for the first steeping. It feels incredibly light on the tongue. Steeping number two follows quickly after the first, using the same amount of time. This round, the aroma and the flavor have become darker, picking up more of the roasted flavor. This makes the tea seem richer, in a sense. Mmm, this third steeping (same time used), is full of rich, oolong goodness. It makes me want to sit back and savor this single cup for a long while. However, I know that this tea has more to give! The next two steepings continue this same trend, only changing in making the flavor more rich and intense. This is one of the best roasted oolongs I have had in some time. I certainly enjoyed trying it! On my personal enjoyment scale, I would rate it an 85/100.

Grand Tea's Traditional Tikuanyin is no longer available.
This review was unsolicited and uncompensated.
Posted by Spencer at 3:22 PM No comments: