Stained Fingers on Thursday - A Review of Zebra Black Ink

This black ink from Zebra comes in cartridges, which accompany the Zebra V-301 fountain pen (click the link for the review!). 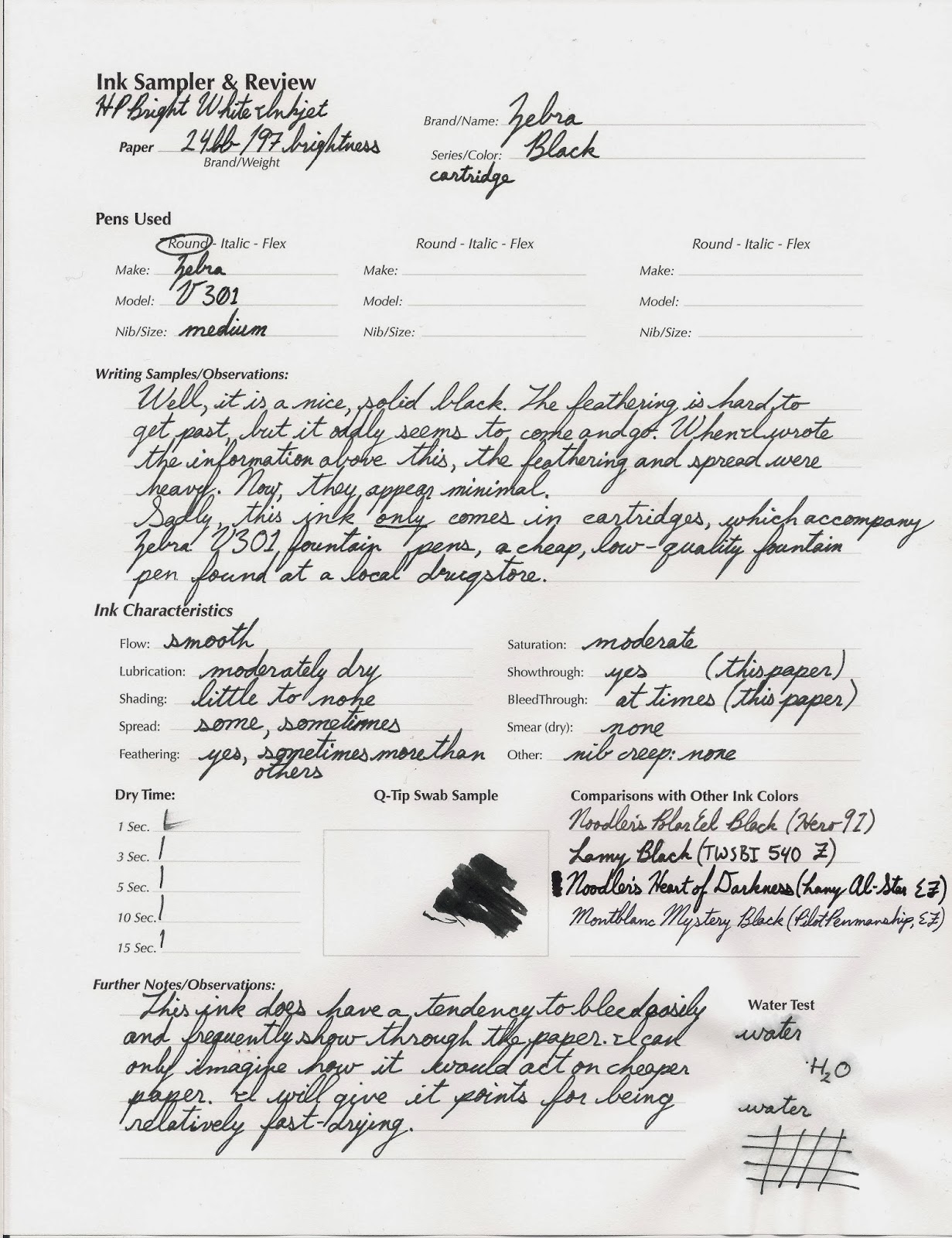 I felt that this tea was going to be a very unique experience. After all, pouchong is not a very common type of tea. The people who grow it refer to it as a green tea, yet in reality, pouchong is actually a type of oolong. The oxidization process is such that the tea is supposed to be very light in flavor.

For preparing pouchong, water of a temperature akin to that which is used for green tea should be used. According to Canton Tea Co's website, the tea is very forgiving, and they recommend using anywhere from one teaspoon to one table spoon of tea per cup of water. As I was making this tea in a 150ml gaiwan, I chose to just go with their recommendation and use 1 teaspoon of leaves. In keeping with their description of it being a very forgiving tea, they recommend 2-4 minutes for steep time. I went with three, just to be safe.

The dry leaves and the wet leaves smell much the same. A hint of fruitiness and a lot of fresh, light, oolong scent. Even after three minutes, the brew looks incredibly pale, but has a wonderfully light, floral aroma. The initial flavor, when the tea first touches the tongue, is light, too. While it may seem ridiculous, it is almost feathery in how soft the flavor is. One is then surprised when the finishing taste is bolder than expected. In fact, it seems that the finish is bolder than the foretaste.

I can see why this tea wins awards. It really is good. Canton Tea Co's website says nothing regarding resteeping, but I decide to try anyway, increasing the steep time to four minutes. I cannot say that the resteeping has improved or changed the flavor. If anything, it is a bit weaker than before. However, this tea still maintains its soft mouthfeel and light flavors. An indefinite steep is probably called for in order to get all the vestiges of flavor from these leaves.

I enjoyed drinking this tea, and it is certainly one of Canton Tea Co's very nice offerings. On my personal enjoyment scale, I would give it a 77/100.


Canton Tea Co's Pouchong may be acquired from their website, here.
Photo credit to Canton Tea Co.
This review was unsolicited and uncompensated.
Posted by Spencer at 10:00 AM No comments:

Stained Fingers on Thursday - A Review of Diamine Green-black Ink

Could this be a viable replacement for the famous Montblanc British Racing Green? As I went to research information on this tea for review purposes, I discovered to my dismay that thepuriTea actually closed, as of December 31, 2013. However, I already had in my possession a sample of these intriguing tea pearls, and it was decided that the review should continue. (When have defunct tea companies ever stopped me, before?)

Instructions for steeping this pearl tea involve six pearls, eight ounces of just-boiled water, and three minutes of steeping time. Just before dropping them in my mug and dousing them with water, I inhale the aroma of the dried tea...not too strong with just a touch of maltiness, somewhat like an Assam. Into the cup goes the tea and water, and my timer is set for three minutes.

Contemplating the myriad varieties of tea, which are formed into pearls, I have often wondered how many of those are just gimmicks (due to their form). I have tried jasmine green tea in pearl-form and loose-form, yet one was only better than the other based on the quality of the tea and not the manner in which it was packed. I could make a comparison to loose versus compressed pu'erh, but the reasons for one over the other, there, are far different than for most green and black teas.

My three minutes are done and so is my tea. Decanting it from the brewing vessel into a pre-heated mug, the smell now is more reminiscent of molasses with the undertone of malt. Perhaps due to the three-minute steep time, the scent is quite light. Then I take a sip of the tea. Initially, the flavor seems small, but it explodes across the palate with a sweetness that is unexpected. The molasses and malt flavors are combined with cocoa undertones in a deliciously complex combination of tastes. I drink my way through the cup, slowly, enjoying the nuances and ways, in which this tea shows off the various facets of its flavor.

Adventurously (and for the sake of my curiosity), I decide to resteep the leaves, while I am sipping the first cup. This time, they are left in my two-cup brewing vessel with just-boiled water for an indeterminate, long time (twenty-plus minutes). The result is much darker, due to the extra time, but surprisingly low in astringency. Cocoa notes have become more dominant, but the flavor is still reminiscent of that first, tasty cup.

I am very glad that I got to try this tea, before it became unavailable. On my personal enjoyment scale, I would rate thepuriTea's Red Dragon Pearl Tea an 86/100.


This post was unsolicited and uncompensated.
Photo credit to thepuriTea.
This tea is no longer available.
Posted by Spencer at 10:00 AM 2 comments:

Well, here we have it - one of my new favorite inks! What do you think? 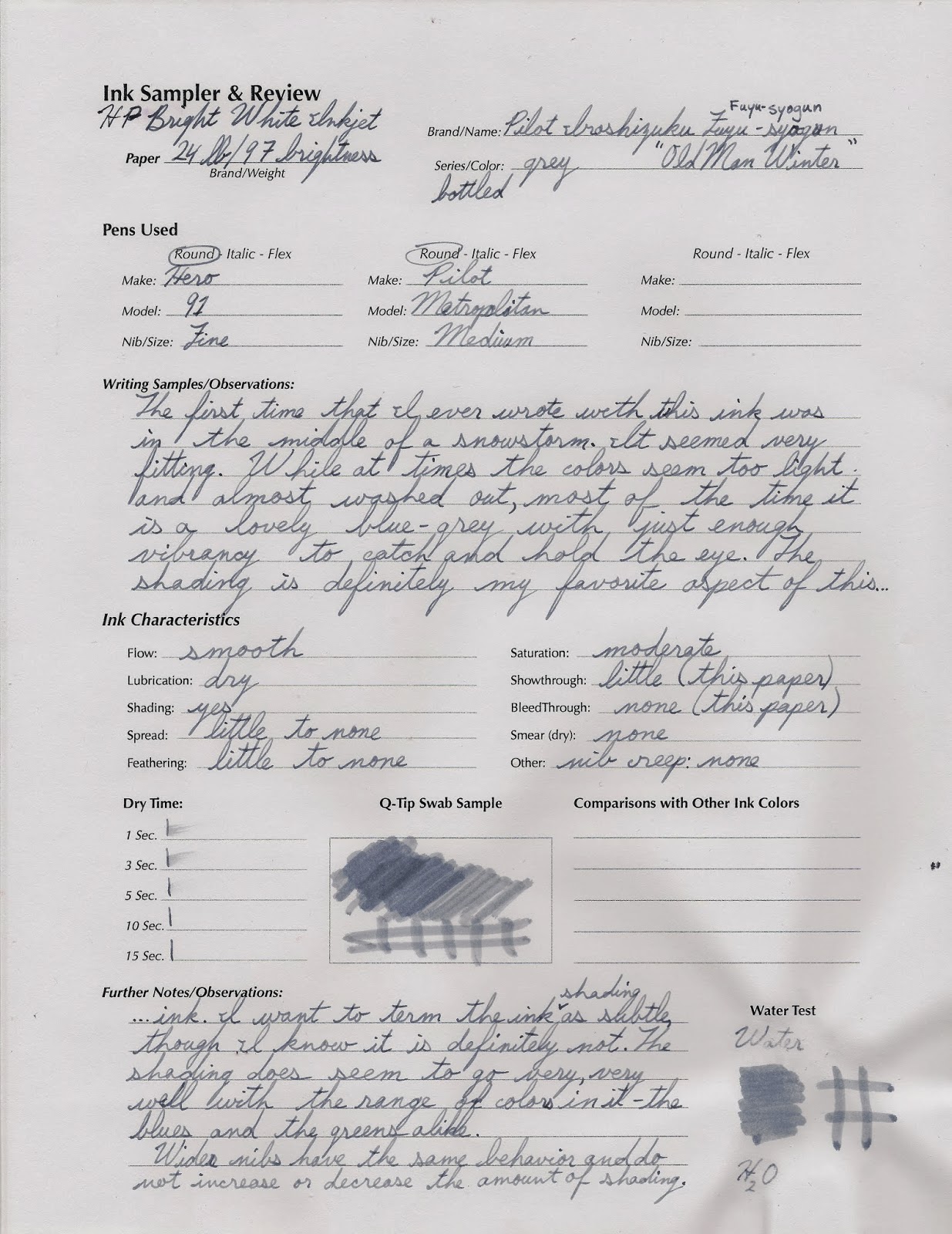 The aromas of this white tea’s dry leaves are quite sweet and grassy. Fuzzy, short, white twists intermix with small green leaves for an enjoyable looking tea.  Canton Tea Co’s packaging suggests using 2 teaspoons of leaf per cup of water and infusing the tea for 2-3 minutes. Accordingly, 2 teaspoons of the tiny leaves went into my cup for a little over 2 minutes. The resulting aroma of this tea was somewhat different than the dry leaves suggested.

My cup of tea still maintained its grassy aromas, yet felt deeper and stronger with a light, roasted smell. I was further surprised when, upon tasting it for the first time, the flavor burst in my mouth, both sweet and fruity and without a lot of the formerly smelled grassiness. Impressed by the full flavor, I continue drinking.

This is one complex white tea…the flavor is not, in any way, straightforward. Slightly reminiscent of half a dozen different white teas, this is a must-try for white tea lovers. On my personal enjoyment scale, I would give it a 91/100.

This review was unsolicited and uncompensated.
Photo credit to Canton Tea Co.
This tea may be found and purchased on Canton Tea Co's website, here.
Posted by Spencer at 10:00 AM No comments:

Montblanc's Permanent Blue ink is one of two new permanent colors, which they added to their ink line in late 2013. The other color is a permanent black. 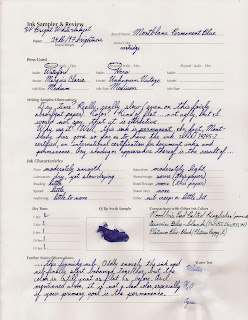 Ah, the pleasure of a good smelling tea. Often the dry leaves, as-of-yet un-infused, reveal a lot about the tea that is to come. The spicy and sweet notes of the dry leaves of this herbal tisane blend in an attractive melody that promises a deep and possibly heavy drink.

Utilizing a Tea Forte Café Cup, I steeped this pyramid infuser for four minutes using just-boiled water. Smelling the infusion, it is clear that cinnamon is definitely what lends much of the spiciness to this tea’s aroma. However, with the first sip, it becomes immediately evident that cinnamon is not all that is in Tea Forte’s Flora. The sweetness of licorice root melds with the explosion of flavor from the hibiscus in this blend. The hibiscus adds a lot of body to this tisane and sweeps through one’s mouth, filling it with flavor.

A re-steep of this herbal blend offers a much weaker version of the first cup, but with the same balance of flavors. This is one blend that is worth trying and might make a tasty chilled drink as well. I would give Flora an 83/100 on my personal enjoyment scale.

This review was unsolicited and uncompensated.
Photo credit to Tea Forte.
This tea may be found and purchased from Tea Forte's website, here.
Posted by Spencer at 10:00 AM No comments:

InCoWriMo 2014 Update and a Giveaway!

Well, folks, here we are on the third day of International Correspondence Writing Month. I hope your note, postcard, and letter writing is going well. If you missed the post introducing InCoWriMo, you can preview that for more information, here.


As you may recall, I shared an unplanned review of Amodex Ink and Stain Remover at the end of last year. (Click here to read it!) Amodex was kind to share with me some additional small tubes of their Ink and Stain Remover. Hopefully, you will not have any mishaps with ink, while penning your letters, this month. However, in honor of InCoWriMo, I thought it fitting to offer these to the first two readers, who use the contact form, located here, to send me their mailing address! (The Parker "51" fountain pen will not be included with the Ink and Stain Remover, but the winners will also receive a letter from me as part of InCoWriMo.) This blog post will then be updated, when the giveaway has ended.
Update: Both samples have been claimed! Thank you all for your entries.

Sorry, international readers, this giveaway is for United States-based participants only, due to shipping restrictions on this product. However, Built from Ink and Tea has another giveaway planned for the near future, which will be open to all readers!
Posted by Spencer at 10:00 AM No comments: