Stained Fingers on Thursday - A Review of Noodler's Blue-black Ink

This ink is dark. It is really dark. I am not sure that I can express how dark it is. I need to try it in the driest pen that I have, which still has variation, like a Pilot Plumix, just to see how the ink behaves.
In the Baoer Skywalker, there was a bit more color variation; however, this variation was really only visible when using the ink and pen lightly on the paper. Faint hints of blue could be seen in some of the thinner strokes. 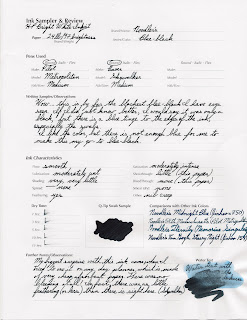 This review was scanned at 600dpi on an HP Deskjet F4200.
Note: Because these scans are done with a light emitting printer, actual colors will, more likely than not, be slightly darker than they may appear, here. The colors shown, here, are probably a bit more reminiscent of what the ink would be like under a bright light or if it were held up and viewed with a light behind it.
Posted by Spencer at 10:00 AM