Of Swapped Parts and Line Comparisons

Hello all! I apologize for the lack of posts outside of our regularly scheduled content. They shall return soon, led by this one! The headquarters of Built from Ink and Tea has been moved to a new location, and the writing desk has at last been set up.

From reader questions, two separate topics have arisen. The first is comparing the Crocodile #232 with the Baoer Skywalker. In my review of the #232, I showed some pictures that had it, placed side by side with a Skywalker, but the similarities in size and details were not clear. (The review of the Skywalker can be found, here.) The question that followed was whether they were created in the same factory and merely re-branded, since both are obviously "tributes" to the Montblanc Starwalker. To this end, I tested this possibility by swapping around some parts, and here are the pictures of such efforts in comparison:

Result: Success, though they were not as firmly capped as otherwise, it would work.

Result: Partial success, the Crocodile cap posted successfully on the back of the Baoer, but not vice versa. The threads in the Baoer cap do not work with the Crocodile posting-threads.

Result: Failure. The threads, despite both being small, did _not_ match, and the sections could not be swapped. However, the nibs appear to be the same size.

On topic number two, allow me to reference my review of the Nemosine Singularity Demonstrator. The question, here, was actually a request - for a comparison of the line widths. To this end, I was more than happy to oblige, having an interest in this, myself. The results of my comparison are as such: 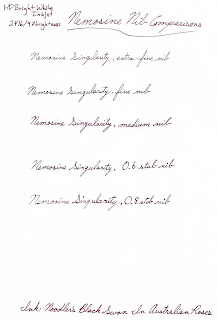 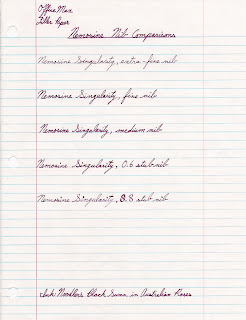 I had hoped to test one of the Knox K35 nibs and include it in the comparison. Specifically, I had a 1.1 stub that would have fit perfectly. Unfortunately, the curvature of nib and feed were such that the K35 nib did not fit the feed quite right, and the feed would need to be reshaped for it to work properly with this nib.
Update: I spoke with the fine folks at XFountainPens.com, who admitted that they had been mistaken in regard to the K35 nibs' compatibility with the Nemosine pen. The nib is the same size; however, the radial curvature is slightly different in the K35 nibs from the Nemosine nibs.

Finally, I hope that InCoWriMo went well for all of you. If you were unaware that International Correspondence Writing Month just ended, I highly recommend that you check out their website, located here.