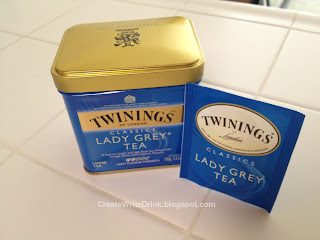 It is not yet Tuesday, but today, I felt that a special tea review was in order. I recently received a tin of Twining's of London's Lady Grey in loose leaf form. Though I do love this tea, I had previously only been drinking it in bagged form, as the grocery stores to which I have gone only carry the teabags. By no means was this a bad thing, as I thoroughly enjoyed the bagged version. However, when the opportunity came for trying Lady Grey loose, I jumped at the chance.

Normally, I do not involve cost in my reviews. In fact, I will not factor it into the final review estimation - only provide it for the sake of interest. From the Twining's of London website, a box of 20 Lady Grey teabags may be purchased for $2.99. At my local Target, this price was much higher at $5.59. The 100g tin of Lady Grey costs $4.49 from the Twining's website. In an estimation of the number of cups made from 100g of black tea with 1.25 tsp, the numbers came to about forty cups. Assuming that no tea is reused and an average (1 teabag/ or 1.25 tsp/cup) amount of tea is used, the loose leaf provides a more cost-effective option, whether it is from Twining's own website or another retailer. Note that this does not take resteeping into account, yet from my own experience resteeping would be more successful with loose leaf than bagged tea. As for the tea itself...

I attempted to make these two cups of tea as similar as possible. I used just over a cup of freshly boiled water in each. In one, a single teabag. In the other, slightly more than a teaspoon of loose leaf. The steeping time for both was about four minutes. After that time, I removed both teabag and loose leaf and set to sniffing.

The aroma of the bagged cup carries far more of the lemon-y citrus scent. To me, the cup made from loose leaf smells richer and deeper - probably an indication that the flavor will be much stronger. The tea being used as a base makes itself known in the aromas of both cups, though the bagged tea seems to wrap the scent of the tea itself in the citrus additions. In the loose leaf cup, it smells like the tea and the additions stand together, hand in hand. One is no more vibrant that the other

The first sip of each tea immediately strikes me with difference. These differences could be promoted by a number of factors, such as the use of differing amounts of tea, the openness of the leaves to the water, the size of the leaves, their ability to expand within the water, etc. It would seem that, despite both teas carrying approximately the same directions for steeping, the outcomes can be radically different. The bagged cup has a very smooth mouthfeel with an aromatic flavor that seems to slide over the tongue, leaving hints of the black tea base. On the other hand, the cup made with loose leaf feels less smooth. It is not rough by any means, but the strength is somewhat higher, and the increased boldness and presence of the tea itself give the brewed tea a more "full" feeling. (That is not to say that the bagged Lady Grey tastes weak, of course.)

Having consumed Twining's Lady Grey in bagged form for some time now, I cannot say that I was expecting the loose leaf tea to be so different. Yet the commonalities lay with the spirit and feeling of this tea. Mildly flavored with orange and lemon, Lady Grey tastes calm, the flavors still reminiscent of its stronger Earl Grey sibling. If your preference is toward light black teas, I can only recommend this tea, even further. On my personal enjoyment scale, I rate it an 86/100.
Posted by Spencer at 7:00 AM