A Review of the Hero 616 Jumbo Fountain Pen

A Review of the Hero 616 Jumbo Fountain Pen 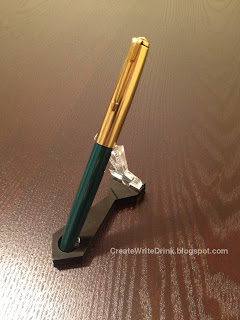 First Impressions (7)
At first glance, the 616 Jumbo appears plain, understated, and perhaps a bit fat. The girth of the pen does not detract from its looks - it is merely noticeable in comparison to other Hero pens (and thus - the “Jumbo” title). The smooth curves of the pen’s body are quite attractive, yet very understated, as I mentioned about the whole pen.

Appearance (7)
The cap of the 616 Jumbo has subtle engraved striping running its length (though this is not so noticeable on my pen, now, on account of wear and age). While the clip may appear to be slightly thin, I find it to be stiff with only the slightest spring. This cap will not be breaking easily under daily use on a shirt pocket, notebook, etc. The cap is entirely of the same gold-/bronze-colored material, including the cap jewel. I feel as though it would have looked much nicer, if the cap jewel was flush with the clip band and the rest of the cap. It is quite solidly affixed, yet it looks, as though it is loose or about to come off.
The body of the pen itself is very plain. In fact, because of the hooded nib, the only thing to break up the (dare I say) “monotony” of the plain plastic body is the partially transparent band between the section and the rest of the barrel. I found it very interesting that a narrow, clear band, framed by two metal bands, would be used here. It is mostly too narrow to get a good feel for the present ink level by sight. All of that being said, it is not bad looking. The body of this pen truly is very simple, and the cap provides most of the character. There is very little else on which to speak for appearance. Plain and simple with a touch of style.


Design/Size/Weight (7)
With a plastic barrel, plastic section, plastic/rubber filling mechanism, and only thin metal for the cap, nib, and sac cover, this pen is really light weight. I personally do not prefer the “Jumbo”, as I find the large taper of the grip to be awkward and not a pleasant writing experience. To counteract the taper, I feel, as though I have to hold the pen too far toward the back of the grip section. However, the length of the pen is good for hands of any size. Does the plastic feel a bit cheap? Sure it does, but it is a cheap pen. The major downside is the grip, which might not be an issue for some people. 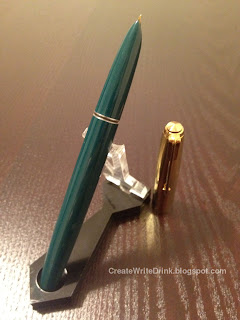 Nib (5)
I am certain that Hero does not perform much quality control on the nibs of their cheaper pens. As this is definitely one of those cheaper pens, I do not expect much out of the nib. However, the nib on this 616 is definitely on the low-end of the quality spectrum that I have experienced with Hero. The nib exhibits a great deal of scratchiness, rough edges, and an odd slant to the left side. (Imagine an oblique nib merged with a European extra-fine round nib.) I doubt this low quality is present in all 616 Jumbo nibs, though the possibility exists. Thus, the low score certainly does not reflect my opinion of all Hero nibs. This one is completely usable, too - just not terribly pleasant. 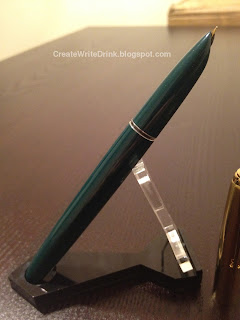 Filling System (6)
Ah, the aerometric filler. Why, Hero, why? Admittedly, I can think of two reasons (and one is more valid than the other, though I shall leave to the imagination which is which). 1) Sacs and the metal covers for them are cheap. 2) It further imitates the Parker 51. In my personal opinion, aerometric filling systems are...okay. I do not particularly prefer them. Though they can be more useful than cartridges (certainly more cost effective), cleaning them fully can be a bit of a chore. The filler on this 616 Jumbo is very standard. Give it a squeeze, wait a second, give it another squeeze, wait another second, and repeat a few times. For cleaning, I would much prefer if the aerometric filling mechanism was removable for the sake of being able to better flush it. (It is removable on some Hero pens, such as the Hero 59.)

Cost and Value (9)
The cost and value are where a great majority of Hero pens shine. (It should be noted that there are Hero pens that retail for more than a Lamy Safari, though they shall have their reviews in due time.) $3 (USD) is all for which this pen retails. If purchased in China, I am certain that the cost would be even less. Yet, for $3, this pen is worth it, so long as its looks and filling mechanism are not issues for the potential buyer. While it might not be the best pen for a beginner, it is certainly sturdier than a Platinum Preppy. 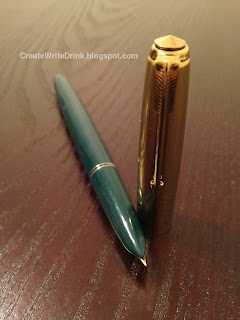 Conclusion (7)
The comparison between most Hero pens and Platinum Preppies is probably one that I will make again in future reviews of Hero pens. Cost-wise, the quality and reliability of the Hero pen shines, if such an inexpensive pen can truly “shine.” For me, the Hero 616 Jumbo certainly has its downfalls, but the simplicity and reliability keeps the user experience a worthwhile one. For a majority of fountain pen users, I recommend looking to other pens from the Shanghai Hero Pen Company.

This review was unsolicited and uncompensated.