A Review of the Monteverde Artista Crystal Fountain Pen and a Giveaway!

A Review of the Monteverde Artista Crystal Fountain Pen

Background
I received this pen from Anderson Pens for the sake of writing a review (after thorough testing) and then giving it away in a contest, for which I am very excited. (Be sure to read all the way to the bottom!) When I received the pen, I had to laugh, for Lisa at Anderson Pens had sent me a pink pen to test. It certainly got some stares and questions, when I used it at work!
My tea has been made...onward to the review! 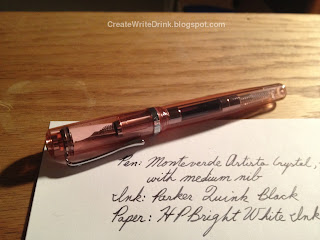 First Impressions (9)
This is how a demonstrator should look! Allow me to back up a moment. The Artista Crystal comes in a very nice Monteverde box. This box, in turn, is within another Monteverde box - cardboard, this time, accompanied by warranty information and a small advertisement for Monteverde inks. The excellent packaging, alone, impresses me. As for the pen itself: it appears to be just the way a demonstrator should look. The non-translucent parts are a chrome/silver, but Monteverde tries to keep those to a minimum. Rolling the pen in my hand, I come across the deal-sealer: a transparent feed. If every demonstrator had, at the least, a translucent feed, I would be very happy. Sadly, very few do. The Pilot Penmanship demonstrator could be made ten times better through the inclusion of a transparent feed, rather than its translucent dark blue, but I digress. The Artista Crystal does not awe me, at first glance, but it makes me take notice, and it certainly holds my attention. 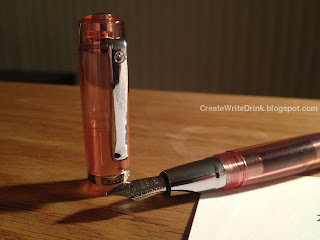 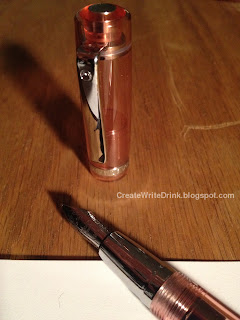 Appearance (10)
The rating, here, is actually 9.5 (for the sake of scoring, I round to the nearest whole number).
I really want to be able to give this pen a full score in appearance. The color options are wonderful (all demonstrators). The cap jewel, clip, and accent band are the only metal parts on the cap, so kudos to Monteverde for not making the mistake, as Lamy did with their Safari demonstrator, of putting some silver shielding inside the cap, covering it halfway to the end. The cap by itself is an excellently designed piece. Uncapped, one can see that the pen has some taper to it on both ends. The entire body piece is translucent with no metal accents (more kudos). The feed, oh, the feed. It is transparent. Thank you, wonderful Monteverde designer, for making the choice to use a clear feed. It looks fabulous. My one, solitary complaint is, unfortunately, a large part of the design: the metal/chrome grip. Yes, it matches the clip and the cap jewel, but, I personally feel that a translucent grip would have suited this demonstrator, more. That said, the next best choice probably was, as it is. 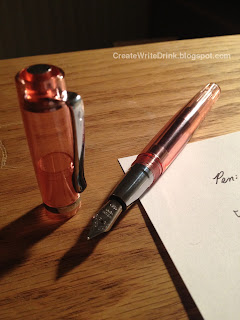 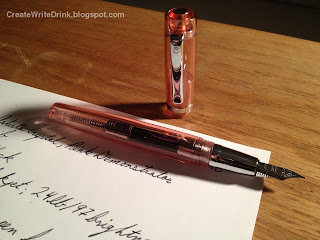 Design/Size/Weight (9)
From the moment I took this pen from its box, I could feel the quality in the design and weight distribution. This pen would be an amazing daily writer for someone. It just so happens that the someone of whom I spoke is not me for reasons I shall soon mention. Nib to barrel... The cap design is solid, really solid. Despite not having any internal metal structure (thankfully, for its looks), the cap has some heft to it, and the plastic of which the pen is made is thick and does not feel brittle. The designers did balance the thickness with not making the pen look or feel chunky. The solid metal cap jewel is a nice touch and contributes a lot to the cap’s weight (and the posting balance, which I shall discuss momentarily). The nib length is a good size, protruding slightly over three-quarters of an inch from the section. It is the section, however, where the problems for me begin. Simply put, it is short, and my hands are large. When writing for an extended period of time, my fingers feel, as though they are being cramped together at the end of the pen. Even with my fingers as far forward on the section, as possible, I am still gripping the barrel threads at the same time. I can still write with no problem, but it is not the most comfortable writing experience. Someone with smaller hands would have less of an issue, I think. The barrel threads, themselves, are of a good depth. The cap screws on and off solidly with a single turn and no wobble at all. The barrel, constructed entirely of the same hard plastic as the cap, feels sturdy and substantial in my grip. Looking at the end of the barrel, I notice something strange. It appears that one portion of the wall is thicker than the opposing portion by twice as much. It does not feel, as though the structural integrity has been compromised, but I find it to be an odd flaw. As I mentioned previously, the cap jewel contributes significantly to the weight of the cap. While posted, the cap thus gives the pen a distinct feeling of being back-heavy. For me, this is not a deal-breaker, as I rarely post my pen caps. Overall, Monteverde appears to have put quite a bit of thought into the design of this pen. 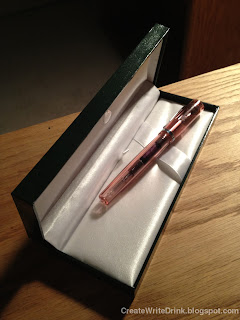 Filling System (9)
This Monteverde is equipped with a very standard, yet highly functional cartridge converter assembly. The barrel is long enough to accomodate the storage of a second, short standard international cartridge, though long cartridges may also be used. The included converter is a good, solid construction. 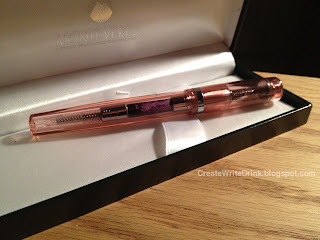 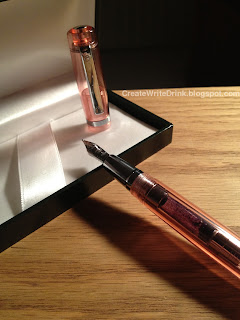 Nib (7)
Out of the box, I am not impressed by this nib. It never had writing issues, per se, but it has some struggles. While I am sure that the feed played a role, here, this pen wrote fairly dry with all of the inks that I put through it. With Parker Quink Black, which I am using to write this review, I feel, as though I am having to press unnecessarily hard to get decent ink flow.
The smoothness of the nib is nothing spectacular, either. With a toothiness that verges on what I would call scratchy, it was not the most flowing writing experience I have ever had. When I did find the nib’s sweet spot, it was a high angle, such that it felt unnatural to hold the pen, thus.
The medium nib is fairly narrow, as a point of observation. 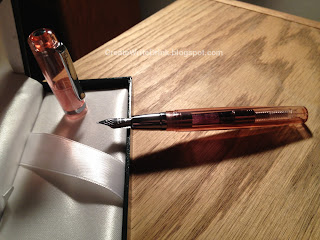 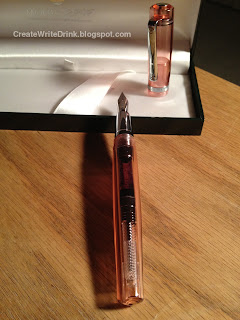 Cost and Value (8)
This is difficult. I feel that I should disclaim or qualify many of my statements. However, factually, the pen has good looks, solid construction, a filling mechanism well-suited to a fountain pen user of any experience level, and a cost of $36 US (retail). Additionally, the nib is not the best, as compared to some high end starter pens (I will avoid terming this pen, as such, but my thoughts here stray to the Lamy Safari and Pilot Metropolitan), nor are there other options, than the medium nib width. To those, who are looking for a beautiful demonstrator (either as a starter pen or a pen that will not break the budget), look no further. But, if you are searching for a customizable pen that offers many nib options, the Artista Crystal might not be the answer. The part to be disclaimed is, for me, this pen does not hold the same value, as one that fits my hand and provides me with a better writing experience. For that, Monteverde, I am sorry. I had such high hopes for your pen and I to become good friends. 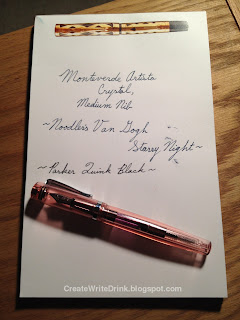 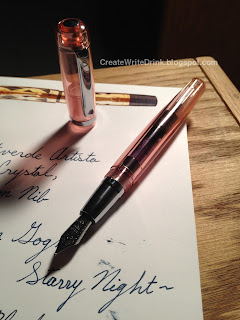 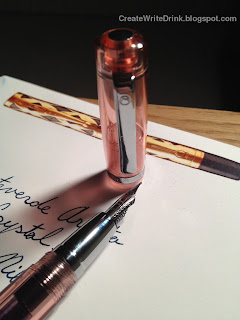 Conclusion (9)
8.6 is the actual score.
This pen is going to make a wonderful daily writer for someone. They may even choose to modify the nib, making it narrower, smoother, and more consistent. It is hard to make blanket statements about hand sizes and comfort level, as personal grip preference and writing style play important roles. Thus, while I do not feel that I can recommend this pen for folks with large hands, it may suit some of them. Monteverde has certainly put a great deal of effort into this pen and its design, and for that they should be applauded. 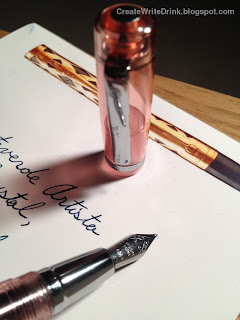 A big thanks goes out to Brian and Lisa Anderson for making this review and contest possible! Be sure to visit them at their fabulous online pen shop, AndersonPens.net. The Monteverde Artista Crystal can be purchased from their shop, here.

Now comes the fun part! You have the chance to call this pen your own, along with one of the stunning Anderson Pens Proper Pads. All that you have to do is leave a comment below, telling us what your favorite demonstrator fountain pen is and then use the handy Rafflecopter form to confirm your entry. (You must use a valid email address to enter.) This contest is open to my domestic and international readers!

Need to know what a demonstrator pen is? Have a quick look at the Wikipedia article! You can earn an extra entry by tweeting about this giveaway.

As always, please feel free to post any questions or comments that you might have, below!
Posted by Spencer at 1:00 AM