A Review of the Wing Sung 233 Fountain Pen


A Review of the Wing Sung 233 Fountain Pen 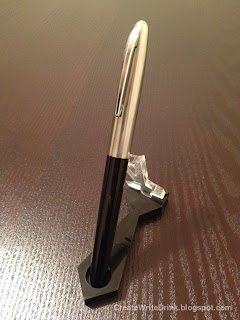 First Impressions (6)
I have mentioned “simplistic” and “understated” as descriptors for fountain pens in the past, yet I think that the Wing Sung 233 takes these words to a whole new level. This was at least my impression upon first viewing the pen, while it was capped. From the plain, unadorned body to the likewise-unadorned cap, both of which lack much for intriguing detail, one could easily overlook a pen like this in favor of more eye-catching choices.
Yet, I know that Wing Sung is a sub-brand of the Shanghai Hero Pen Company, whose simple designs and inexpensive pens are daily-use writing instruments for many. There must be a factor that contributes quite positively to the design. 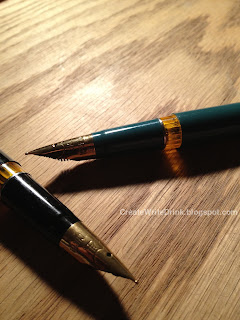 Appearance (7)
As mentioned above, the looks of this pen are nothing at which to necessarily get excited. Capped, the plain, black body provides a nice contrast to the brushed chrome cap with its faintly engraved lines, running its length. The clip is simple and ridged, yet it does not impress me that it is so tight, as to constantly slip toward one side or the other of the cap. Based on the shape of the clip’s side panels, it does not look as though it should be as tight as it is. Faintly engraved at the base of the cap are the words “Wing Sung,” “233,” and some Chinese characters that I have begun to recognize as being present on nearly all pens that are made by the Shanghai Hero Pen Company. On this pen in particular, they are are engraved at the base of the cap, on the metal cover for the aerometric sac, and on the nib.
Removing the cap, I both like what I see and dislike it at the same time. Starting at the nib... The nib is of a wrap-around style, which looks fantastic and very unique, but the makers chose to go with a fake-looking gold color for the nib, which clashes with the chrome of the section band and the cap. Additionally, they stamped “Made in China” across the top of the nib under the Chinese characters, which just seems tacky. Behind the nib is the smooth grip, which is the same color as the body, followed by a chrome ring, an amber ink window, and the body itself. The amber window is nice, but I do wish that they had used the same color metal over the whole pen. 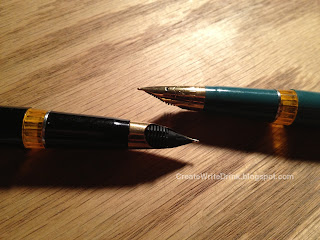 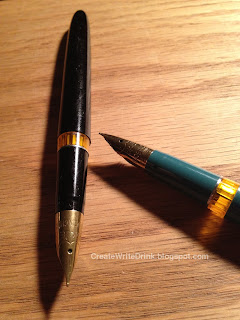 Design/Size/Weight (6)
I already mentioned the wrap-around nib as being a nice aspect of this pen, but there are far more design features, which I feel were good choices on the part of the Shanghai Hero Pen Company. First is the slight tapering curve in the grip. This taper curves in as it narrows, rather than out, as some tapers do. Thus, despite the smooth grip section, I never felt as though my fingers were slipping down toward the nib. The decision to add an ink window to the  section above the grip is strong in theory, providing the user with a good view to the ink supply; but the amber color, the narrow width, and the internal ribbing on the window distort the view in this pen, greatly. The length of the body is just long enough for my large hands, so as to still be comfortable. Since the cap is relatively light, posting it does not affect the balance of the pen. In fact, because posting it does not add a great deal of length (no more than an inch to an inch and a half), the 233 is one of the more comfortable pens that I have used, posted. Replacing it, the cap snaps on to the body, hard, and has no danger of accidentally coming off, while capped. Around the area where the ink window and the grip section end and the body of the pen begins, there is a bit of a step on account of the body being of a slightly larger girth than the ink window portion of the section. 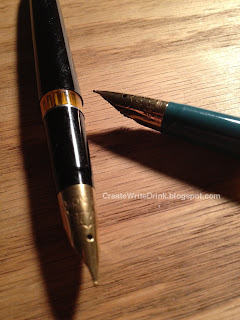 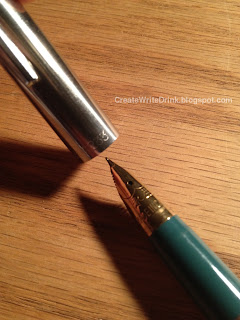 Nib (5)
The nib certainly has a cool shape...too bad the performance does not match it. Honestly, it is nothing special. While not a rough scratchiness, the scratchy aspect is present no matter what direction the pen is writing. While the nib does not chew on the paper, the writing experience is far from gliding, though I am sure that some at-home nib touch-ups would lead to a slightly more enjoyable usage. 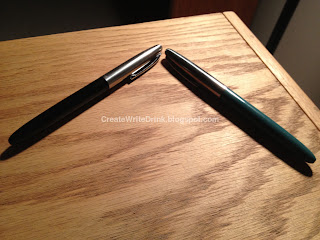 Filling System (6)
I find it too bad that Wing Sung (and thereby the Shanghai Hero Pen Company) insists on using aerometric filling systems in so many of its pens. These mechanisms can be very hit and miss for quality, as well as often frustrating to clean. I appreciate that some of the Hero pens have a removable aerometric mechanism, which makes them much easier to clean and dry. This Wing Sung, however, is not one of those, and the filling bar on this particular pen proved very finicky to fully depress, while loading the pen with ink. 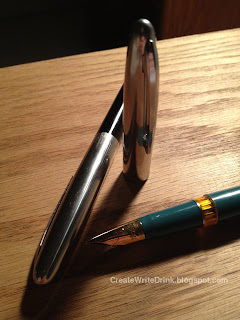 Cost and Value (7)
Despite the shortcomings of this pen, the $3 US price tag is hard to beat...unless you find another pen made by Hero that has nicer features, performs better, and is better designed. Doing so does not prove difficult, certainly, yet few enough have the wrap-around nib. I found that this pen proved to be decent for some daily note-scratching and adding appointments to a planner. 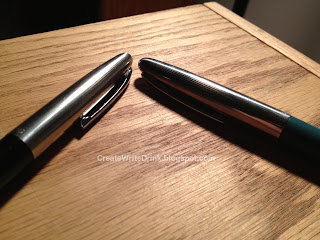 Conclusion (6)
Unless you really like the looks or you collect pens from the Shanghai Hero Pen Company, I recommend you keep looking, rather than choosing this pen. The Wing Sung 233 is not a bad pen by any means, but I do not think it will be winning awards or popularity contests any time in the near future. 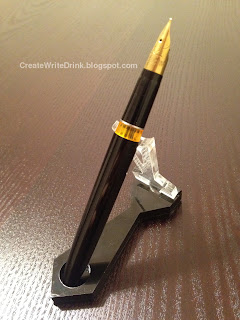