Yesterday, while browsing the Pilot Pen site for the EU, I discovered a product of which I had never heard before: the Pilot Plumix Neon. The general information site is here. The version of the Plumix available in the USA utilizes Pilot proprietary cartridges. The Plumix Neon from the EU takes standard international cartridges. From what I could deduce, this Pilot Plumix Neon is nothing more than the section from a Pilot Pluminix, which takes standard international cartridges, combined with the cap and body from a Pilot Plumix. Admittedly, the Plumix Neon also appears to be available in just as many colors as the Pluminix, as compared to the mere three colors in which the Plumix is offered (Blue, Purple, and Black).

As I was unable to find any Plumix Neon pens available on English-language websites, I decided to take matters into my own hands and craft my own Pilot Plumix Neon "Franken-pen!" My color options are limited to the three colors of the Plumix, so I chose purple. 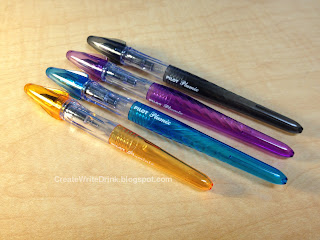 Here is a close-up picture with focus on the sections of my Pluminix pen and one of my Plumix pens, side-by-side. 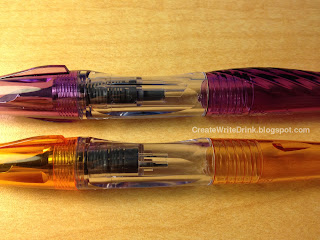 I proceeded to disassemble both pens, removing caps and bodies and leaving the nibs and feeds in their respective sections. 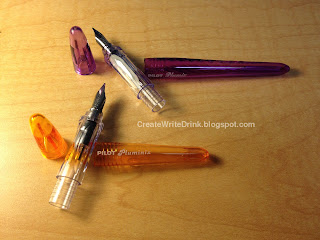 And then I swapped them! The Pluminix now can take proprietary cartridges from Pilot, and the Plumix can now take standard international cartridges, effectively turning it into a Pilot Plumix Neon. 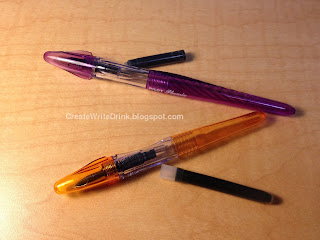 Note: The threads on the Pilot Penmanship are different and do not accommodate such swapping. See this post, here, for information about swapping nibs between various Pilot pens!
Posted by Spencer at 10:30 AM