A Review of the Baoer Skywalker Fountain Pen 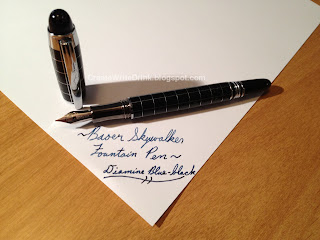 First Impressions (10)
Wow, what a snazzy pen! I know that this pen is intended to look like a certain model of a certain famous German pen, and, at first glance, this pen  grabs the best of the similarities and provides a high first impression.

Appearance (8)
Upon closer inspection, the pen still meets my first impression, though a few things subtract from the overall greatness. Primarily, these design flaws (as I think of them) are in the cap. While the clip may be fairly strong, I found that the look of it was somewhat cheap and detracted from the sleek lines of the cap and body. That being said, I feel the same way about the clip on the Montblanc Starwalker (a pen very similar to this one in looks, though not in price). The other issue I had with the appearance was the floor of the glass dome in the top. It does not appear to be level with the rest of the cap. This could just be a quality control matter, consistent with the low cost of this pen.

Design/Size/Weight (9)
I was very pleased by the overall design of this pen. For having a mostly-metal body, the weight is sturdy but not overly heavy. Capped, the pen is heavier at that end, but, without the cap (and not posted), the pen is well-balanced. The cap may be posted on the threads at the end end of the body, and this only makes the pen slightly back-heavy. The one design element that could be improved is the plastic end piece on the barrel. Using metal, rather than plastic, might have improved the balance of the pen even further. 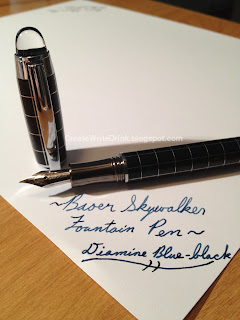 Nib (9)
This pen has one of the smoothest nibs I own! It is at least as smooth as my Lamy Safari fine nib, if not a bit smoother. The width is approximately a European fine, though the nib does have a bit of flex. It looks classy in a rather understated way, as the shiny, chrome-looking nib is simply stamped “Baoer” with some curving lines.

Filling System (9)
The Skywalker takes standard international cartridges (short or long), and mine came with a standard international converter. The quality of the converter is not the best, but it does function without any issues other than some less-than-smooth turning operation of the piston knob. I have also found that certain inks have a tendency to dry or stick in the feed after a few days of not writing with the pen, but running the nib under cold water for a second will quickly loosen the ink and get it flowing again.

Cost and Value (10)
I acquired this pen at the very low cost of 6 USD, and I would be quick to purchase another one of these for a gift or personal use. The price and overall value completely outweigh the few drawbacks. 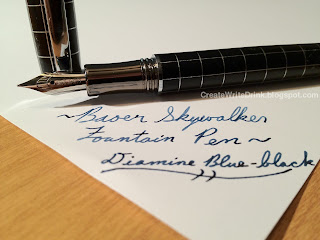 Conclusion (9)
Overall, I feel that this is a very inexpensive and highly classy pen. If the look of the silver squares and glass dome are pleasing to you, then this pen is absolutely worth the money. The inclusion of a converter further sweetens the deal.

A review of the rollerball version of this pen will be coming soon! This pen can be purchased from iSellPens.com, here. This review was unsolicited and uncompensated.

Feel free to post any questions or comments!
Posted by Spencer at 11:01 AM