A Review of the Crocodile #232 Black Leather Fountain Pen 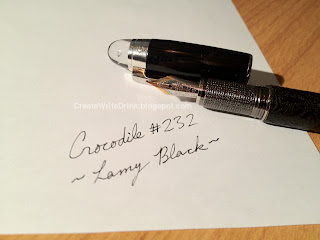 First Impressions (10)
Wow, what an awesome-looking pen. When I had seen this pen online, I had been impressed. Now, though, I am even more so! If it were not for “Crocodile” printed around the cap and on the clip (and the crocodiles imprinted in the leather), this pen could certainly pass for a Montblanc Starwalker version at first glance. 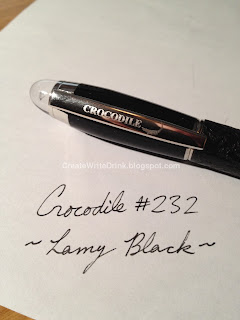 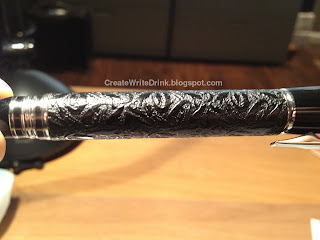 Appearance (10)
While I am sure that the gem in the glass dome on the cap of this pen is made of cubic zirconia, it, nonetheless, gives this pen an air of luxury. Likewise, the leather-wrapped barrel presents a fancy air with a touch of ruggedness. This Crocodile bears a striking resemblance to the Baoer Skywalker (though, of course, they both pay tribute to the Montblanc Starwalker). The crocodiles that are imprinted in the leather are nearly unnoticeable, until one looks at them very close. In fact, it is not one single shape in the pattern, but a number of different crocodiles in repetition. 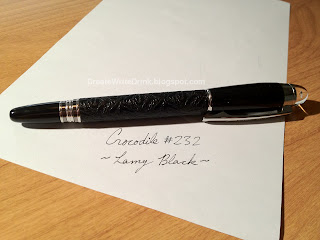 Design/Size/Weight (7)
I found that the gem in the glass dome was a bit off-center, which I expected in a pen of this price point. The barrel has moderate weight to it, which is barely increased by the cap, as the black body of the cap appears to be made of a plastic, just like the end of the barrel (a feature that I noted to be present in the end of the Baoer Skywalker barrels, as well). On the end of the barrel, the plastic is fine and seems solid, but, on the cap, the plastic feels cheap. Additionally, the metal clip feels thin and cheap, as though it might break with too much stretching. The cap can be posted upon the threads at the end of the barrel. The use of two metals of different shades with the section and accent bands works quite nicely with the leather and the black plastic. The textured grip is comfortable to hold but can feel a bit rough from some angles.

Nib (6)
When I first filled this pen, it skipped a LOT. Downstrokes were solid, but side-to-side movement provided a barely visible line...when there was a line at all. After some adjustment of both the nib and the feed, it writes much better and much more consistently. The two-tone nib looks and feels a bit cheap, though it is moderately smooth.

Filling System (6)
Standard international cartridges (short and long), as well as a standard converter, may be used in this pen. The included converter is, sadly, of a flimsy construction.

Cost and Value (7)
At 15 USD, this pen carries a price tag that is about the upper range of what I would pay for a pen like this. However, for the look, it was certainly worth it. For the functionality, there are far better options at this price. 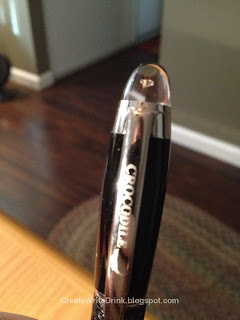 Conclusion (8)
If you are looking for pens in the style of the Montblanc Starwalker, I recommend looking at the Baoer Skywalker, rather than this pen, unless this Crocodile’s appearance really strikes you. It is a rather nice-looking pen. The adjustment that was necessary could be very off-putting to anyone, who did not have experience with (or desire for) adjusting fountain pen nibs.

The Crocodile #232 can be purchased from iSellPens.com, here. A review of the Baoer Skywalker can be found here. This review was unsolicited and uncompensated. Feel free to post comments or questions! Yes, I definitely need a macro lens...
Posted by Spencer at 10:00 AM