A Review of the Baoer Skywalker Rollerball Pen 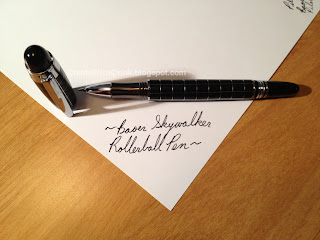 First Impressions (10)
I already own the Baoer Skywalker fountain pen, so when I removed this pen from its packaging, nothing surprised me about the look. The simplicity and beauty are nice for such an inexpensive pen.

Appearance (9)
Side by side with the fountain pen version, with caps on, they are indistinguishable. In fact, I think that the bodies and caps are the same, and the only difference is the section, which cannot be seen while the pens are capped. That being said, I still feel that the clip has a bit of a cheap look to it. On the other hand, this rollerball does not seem to have the same issue with the floor under the glass dome not being level with the rest of the cap, leading me to believe that this was merely a quality control issue with the fountain pen that I have.

Design/Size/Weight (10)
On account of the extra metal in the rollerball section and the rollerball cartridge itself, this pen is a bit heavier than the fountain pen version, but it still maintains a very balanced weight. The weight is also very comfortable. The minimal amount of heft gives the pen just enough presence that it is felt, yet it remains comfortable. The cap may be posted on the threads at the end of the barrel. 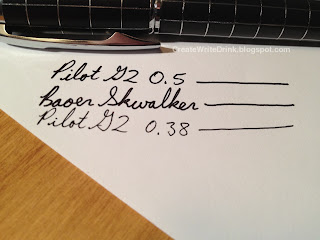 Nib (9)
Nibs on rollerball pens like this one are very cartridge-dependent. For that reason, I will just touch on the unmarked cartridge that came with this pen. The tip is very smooth and has no scratch and just a slight amount of feedback, which I think is a good thing. The width is slightly wider than that of the Pilot G2 0.38 tip and narrower than the tip of the Pilot G2 0.5.

Filling System (10)
This rollerball takes standard rollerball refills, and it does not get much easier than this. Those from Duke are quite inexpensive (about a dollar apiece). The pen came with one that is unmarked. I think that the standard Montblanc refills may fit, though I have not confirmed this. It would, of course, carry the similarities between this pen and the Montblanc Starwalker to a further degree, if such were desired.

Cost and Value (10)
For 6 USD, this is a very classy rollerball. I prefer to use fountain pens, but when a rollerball is needed, this pen does the job excellently. In addition, it looks great next to the Baoer Skywalker fountain pen, and I wish that they were sold as a set in a nice box. 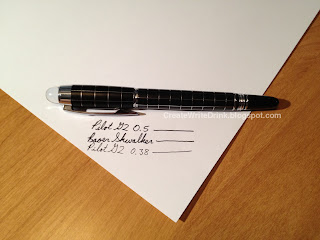 Conclusion (10)
Searching for a nice-looking rollerball pen? Love Chinese pens that imitate pens of much higher price? Enamored with the appearance of the Montblanc Starwalker but not with the cost? For the aforementioned questions and a number of other reasons, I think this pen is great and a worthwhile purchase.

You can read my review of the fountain pen version of the Skywalker, here! This pen can be purchased from iSellPens.com, here. This review was unsolicited and uncompensated.


"You can never have too many friends & pens!"
~iSellPens.com
Posted by Spencer at 11:00 AM