Before I begin the review, I would like to specify the Noodler's Konrad discussed here is the original, flex version, made of a celluloid derivative, and it should not be confused with the new ebonite or acrylic Konrad flex versions. 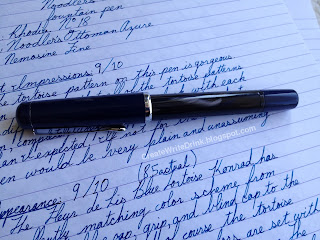 First Impressions (9)
The tortoise pattern on this pen is gorgeous. Even better is that all of the tortoise patterns are different, offering a new look with each pen, completely unique. Capped, it is a lot shorter than I expected. If not for the tortoise, this pen would be very plain and unassuming. 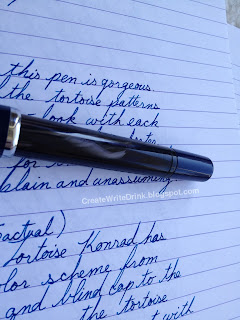 Appearance (9)
The Fleur de Lis Blue Tortoise Konrad has an excellently matching color scheme from the solid blue cap, grip, and blind cap to the silver accents and of course the tortoise body. The swirling tortoise colors are set with a deep blue background, nearly unseen. The tortoise pattern is different for each pen, but this one is particularly deep and dark (though I have seen the opposite, even on this model - vibrant and bright swirls of color). When viewed next to the tortoise body, the blue portions seem almost dull, but they really have a subtle richness to them, unnoticed at first glance. Overall, the shape and lines are reminiscent of a vintage pen, and it presents itself well. 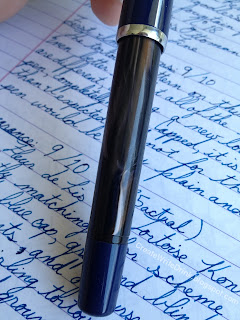 Design/Size/Weight (8)
While it may not look it at first glance, this pen is comfortable. This is despite the fact that the threads and upturned front end (on the section) appear sharp and awkward. They truly (and surprisingly) are not.

Speaking of the threads, I find it strange, yet purposeful, as to their placement. They are located on the section, just behind the grip, but before the ink window, seeming very close to the nib. However, when the cap is screwed onto the pen, it covers the ink window and part of the barrel, and the nib is nearly all of the way to the end of the cap. This serves to leave a still-short pen, even while capped.

The nib and feed are friction-fit, and the piston knob is covered by a blind cap. The pen may also be fully disassembled with nib, feed, and piston mechanism removed. The overall style was aimed toward that of vintage piston-fillers, according to the creator, but he also wanted it to be easily fixable, if not customizable, as well. That said, I wish the piston mechanism used a knob that was the same size (or so) as the blind cap, rather than the very small knob, currently under the blind cap.

Overall, the pen is very light, being made from a celluloid derivative. Most of the weight that is felt resides in the nib and feed, which does cause the pen to feel slightly front-heavy. 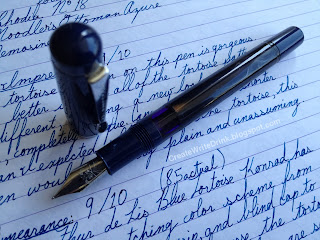 Nib (7)
The nib, which comes with the Noodler’s Konrad is a steel flex nib of little note. It flexes with a good bit of pressure, and the line is consistent, though not very smooth. The nib will write without flex, if very little pressure is applied. That being said, note the relatively high score for the nib part of this pen. Customization is the key to that! The Konrad takes a #6 nib, easily acquired in a multitude of forms and sizes. As of July of 2013, Noodler’s now produces an inexpensive steel standard nib for #6 settings. The Nemosine nibs also fit well, and they are available in EF, F, M, B, 0.6, and 0.8 sizes. Bock and JoWo also produce #6 nibs, such as those used by TWSBI in their Vac 700 pens. The Goulet Pen Company has begun to offer inexpensive, yet quality, JoWo #6 nibs, actually intended (in part) for the Noodler’s Konrad and Ahab. Yet the customization does not stop here. As the feed is  made of ebonite, nibs may be “heat set” with their feed for optimal fit, flow, and performance. Well-planned, Noodler’s! 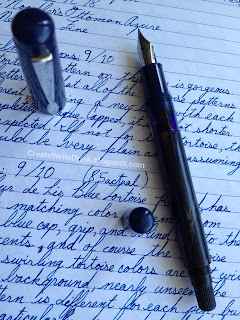 Filling System (8)
Ahhh, the Konrad’s filling system... a very interesting piston-filler. The filling is managed by means of a piston knob, hidden below a blind cap on the end of the pen. I found that the knob was a bit small, sometimes causing it to be less than ideal in filling. Moreover, the piston mechanism was far from the smoothest that I have tried. It is not bad, but it could be better. 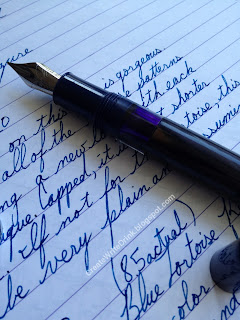 Cost and Value (9)
I truly believe that the value of this pen lies in how it is seen by its owner (or future owner). If it is seen, as Noodler’s intended for it to be seen, a craft-like pen to be changed (as with the nib) to the liking of the user, then its value is great. To have a flexible (in the figurative sense of the word) pen, in which I may use a myriad of nibs with a fully-adjustable feed, is of great value to me. Someone looking for a replacement for their vintage flex pen might have a totally different opinion (which might be changed yet again, if they fit a Konrad with a vintage flex nib). Depending on how one looks at it, this pen’s retail cost of $20 is a good deal. It can be gotten for even less - a greater deal. 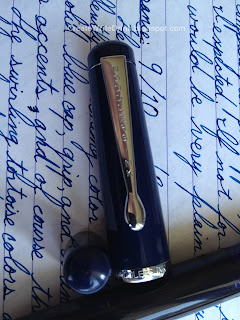 Conclusion (8)
In conclusion, I feel that the Noodler’s Konrad, in one of its many colors, with one of many nibs, would appeal to nearly anyone. However, the Konrad may be too large for some writers with small hands. I deliberated for a long time, whether or not I wanted one of these pens enough to acquire it. Using it with a fine nib of another brand, I have never been disappointed. 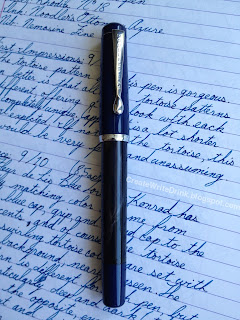