Ready to chill? The Big Chill by DavidsTea has the herbs that are intended to help you relax and sleep better! If you have had Mother's Little Helper by DavidsTea, this is a lot like that...but with a citrus twist. It is time to relax...and try this blend!

So, despite this being sold as a more citrus version of Mother's Little Helper, I found it interesting that The Big Chill only has two ingredients that are vaguely citrus: silver lime flowers and lemon myrtle. Quite the trickster, silver lime is actually a flowering plant - not a lime. The lemon myrtle does lend its citrus-like aromas quite heavily, though! This blend does contain a lot of fruit, too, including apple, apricot, and mango. The blend also has apple mint, which sounds like another fruit, but is not. The key ingredient in helping us chill is valerian root, an herb that is often used in helping reduce sleep problems or anxiety. (Personally, I like to steep it with herbal blends as a bit of stress-relief.) 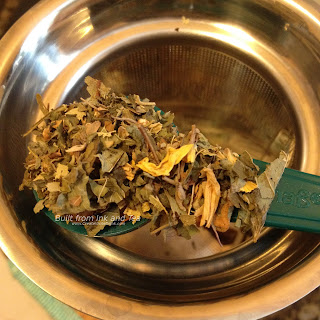 From the aroma, I instantly notice two things: mint and lemon-like scents. However, there is a lot more than just those two smells coming from this blend. The mixture smells sweet in an herbal way, and it smells like there are a lot of different aromas blending together. I steeped two teaspoons of the herbal blend in twelve ounces of just-boiled water for seven minutes, then let it cool enough to be drinkable. The aroma of the brewed tisane carries all the same scents as the dry mixture, albeit with a heavier emphasis on the lemon-like smell. 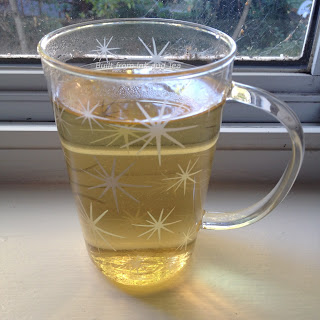 The first sip tastes delicious. Despite the long steeping, it does not at all taste strong. If anything, the flavor is a bit weaker than I would have preferred. The body of the tisane does not taste sweet, but there is a certain sweetness to the aftertaste that I suspect comes from the apple and the mint. As I sip down the cup, which goes smoothly, there is something about it that spreads and warms the body. 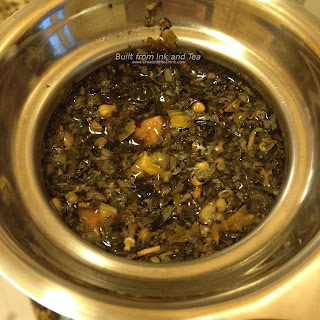 When I finished my first cup, I made a second, using a long steep time and twice as much leaf (four teaspoons). The two flavors that got really intense? The mint and the lemon. This is the intensity that I was anticipating, and I find it to be fairly tasty. On my personal enjoyment scale, I would rate The Big Chill a 3.