A Review of the King Nib Fountain Pen Writing Set

Welcome back to another pen review, here on Built from Ink and Tea! We are excited to be delivering more of this content to you, now, and in the near future. Today's review covers the King Nib Fountain Pen Writing Set, a relatively new offering in the fountain pen community. (Note, the number following each section heading is the score for that section out of 10.) 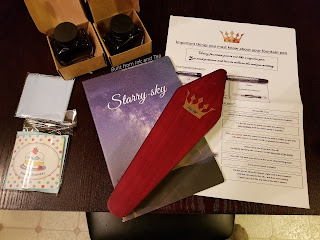 First Impressions (8)
Upon receipt of the King Nib Fountain Pen Writing Set, I eagerly opened the box, revealing all of the interesting gear included with the pen. This is most certainly much more than just a two-nib pen set; it also comes with two bottles of ink, two converters for the pen, a wooden gift box, a screen-cleaning cloth, a small “Happy Birthday” card, a wide-ruled journal, and an informational sheet about fountain pen usage. The informational sheet especially stood out to me, as very few pens come with these. Certainly, many fountain pens are targeted at folks who are already familiar with the workings of a fountain pen, but the inclusion of such a sheet could make this set even more fitting for the beginner fountain pen user. While this review will be primarily for the pen, I wanted to go ahead and mention that I appreciate the inclusion of these items, and it shows that a lot of thought went into designing the set. I successfully tested three different inks on the paper in the notebook for fountain pen-friendliness, each showing-through a bit with no bleed-through or spread. It would be nice to see the informational sheet edited slightly for English grammar and wording, but the information provided is solid. Two unlabeled bottles - one blue and one black - comprise the provided ink. After testing the ink in both the King Nib pen and a Pilot Metropolitan (the latter with which I have never experienced any ink-drying issues in the past), I found that there were no issues with the ink itself. The Metropolitan started writing right away, after being left for several weeks. More to come on the King Nib and its writing.

Appearance (7)
Straight out of the box, the wavy pattern that runs the length of the barrel and the cap struck me. It really catches the eye in a positive way, the curves emphasizing the shape of the barrel. There is a slight taper with the cap and body, where the cap is a touch wider than the body, and the barrel tapers a bit more sharply toward the end. Not stunning, but classy, would be an apt description for this pen.
My first impression of the black band around the center and the black end cap were that they really broke-up the design, and that the plastic material from which they are made would just look cheap. After a couple of months of use, I mostly disagree with my first impression. The black does break-up the silver, but that might be for the best, as a full-silver barrel could be great...or it could look over-the-top. Additionally, the black band and black end cap do serve to balance the black stylus that is on the tip of the cap. I will talk more about that in the Design section, but the inclusion of a stylus gives the pen a more-functional/less-dressy look. As a pen that comes in a set like this, I feel that this fits with the use-case. Sure, it may be more casual or day-to-day-focused. The creator intended the pen to look good, but they also intended that it be frequently used, rather than finding a display-home on a desk.
The King Nib branding has been placed on the side of the cap in an area without the wavy lines. It is small and unobtrusive, looking more like an area for personalized engraving than a brad name, but I appreciate the lack of over-the-top branding, and it does feel fitting for this pen.
The King Nib fountain pen bears an uncanny resemblance to the Jinhao 250, albeit it seems as though the designs have been improved - adding the full-body engraving, changing the nib, making the material color choices cleaner, adding a stylus, and relocating the branding. 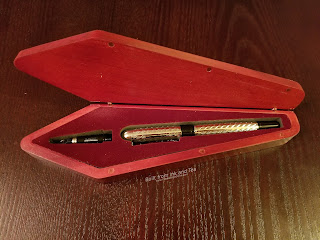 Design/Size/Weight (7)
From a design standpoint, the placement of the stylus has been chosen to be as least intrusive as possible. It shortness is balanced by the slightly wider black band on the bottom of the cap and even wider black end cap on the body. They flow well with the taper of the pen, which seems smooth, even with a few interruptions.
The clip of the pen is very strong and functional, and the clip's grip is very tight. It may be too much for some thicker shirts or pen loops. But it has been placed such that there is a large gap between it and the pen cap, allowing for those thicker pen loops to hold it snugly, if it can be slid over them. The pattern on the clip disappoints me slightly. It only partially fits with the wavy lines on the rest of the body, but I appreciate that the branding is not placed on the clip, as the clip presents a plain, sleek view to anyone seeing this pen on a shirt pocket or notebook.
The cap snaps onto the body of the pen, rather than being threaded. I personally prefer threaded caps, as snap caps tend to have more wear on them and risk wearing down or breaking over time. However, the point on the pen body, where it snaps into the cap, is situated just below the nib and above the grip, which I have found to require less effort to close (versus a snap-in point below the grip and above the rest of the barrel).
The grip itself has grooves that run the circumference, slightly tapered by otherwise cylindrical, with no angled surfaces to guide one’s grip on the pen. The plastic is a bit slick, but otherwise I found no issue with the feel of holding it for an extended period of time.
The threads on the grip do not tightly fit into the threads on the barrel. While it does close closely - and remains closed fairly well - I have had times, where I removed the cap and in doing so loosened the grip from the barrel.
The King Nib fountain pen does not post well. To me, this is fine, as I rarely post my pens, though I am sure that some may be disappointed by this.

Nib (9)
I found the writing experience with the King Nib fountain pen to be fairly pleasant. For the price point, the stock steel nib fared well, offering moderately smooth writing on Field Notes, Tomoe River, and general copier paper. The nib itself is nothing special and might be upgradable based on the size. Of special interest is that the pen does come with a second nib in the form of an entire second grip section with nib. This secondary nib is of the eastern Fude style, intended for use with some calligraphy. While this is not something that would sell me on the set, I did think it was a very cool addition, and I know some folks that would be eager to have a combined set like this. For what they are, I would rate the nibs highly.

Filling System (7)
A filling system that takes standard international cartridges and allows for using standard converters - definitely desirable in my book. That alone would lead me to rate this highly. However, when I left the pen for a week without using it, it had difficulties writing again upon my return to it. Even priming the nib by expelling a bit of ink only provided a temporary solution. Compared to other pens, which I can store nib-upright and use immediately after weeks of not, this was the biggest issue I had with the King Nib fountain pen. A bit of shaking the pen would sometimes bring the ink back to the nib, but the flow was hesitant and inconsistent. I believe this problem stemmed from the filling system, as the nib was completely clean and not clogged with ink. If this pen uses the same internals as the Jinhao 250 (mentioned earlier), then they leave something to be desired.

Cost and Value (7)
When last I checked the price for the full King Nib fountain pen set on Amazon (one cannot buy the pen separately), the price had been lowered temporarily from $37 to $29.98. Considering the contents of the set, I feel that this cost feels like a decent value. However, the value here is in purchasing the set itself, needing two more bottles of ink, desiring to try the secondary calligraphy nib, perhaps giving this as a gift (in which case the wooden box is a major plus). For someone, who is looking to simply add another fountain pen to their collection, the extras might be nice but unnecessary.

Conclusion (7)
The King Nib fountain pen, along with all of the extras included in the set, would make a good starting point for those interested in calligraphy and fountain pens. The options for nibs and ink colors are complemented by an approachable price point and a good-looking pen. While the internals could be better, the pleasant writing experience should provide a good introduction to those new to these unique writing instruments.

Thanks to King Nib for sending me this pen. It was provided in exchange for an unbiased review. The King Nib Fountain Pen Writing Set is available from Amazon, here.