On the heels of my last review, which covered Runa's Traditional Guayusa, I am excited to bring you my thoughts on a variation this week - their Mint Guayusa.

I brewed my pot of Runa's Mint Guayusa for five minutes, using setting 1 (for green and white teas) on my Adagio TriniTEA, with four teaspoons of guayusa and four cups of water. As I mentioned before, guayusa is not tea in the sense that it is not from the camellia sinensis plant (as black teas, green teas, white teas, etc. are), yet guayusa nonetheless has a lengthy history of use in making medicinal infusions in hot water and being consumed for its stimulating effects. Guayusa originates in South America and is a close relative of mate and yaupon (all three are types of holly trees). 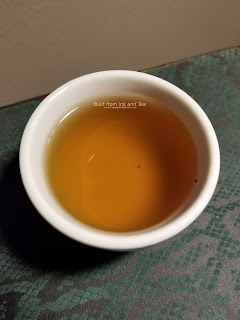 The infusion results in a cup that seems lighter in color than traditional guayusa, but the smell is certainly minty. In fact, most of the aromas are centered around the mint that has been added and only a small amount of roasted green notes from the guayusa show through. This provides an interesting contrast with the aromas I got from smelling the dry, loose leaf Runa. There, I felt as though the mint (while strong) balanced equally against the roasted notes of guayusa.

My first sip touches the tongue with the warm-to-cool transition of a cup of mint tisane. However, it never quite gets to the full coolness of mint, as the flavors of guayusa show themselves. I found that the guayusa did not seem quite so bold in the Mint Guayusa as it had in Runa's Traditional Guayusa. The flavors are overall very straight forward and to the point. There were not a lot of layers of complexity, as the two ingredients put forth their all in a blend of (surprisingly) medium-strength flavors. 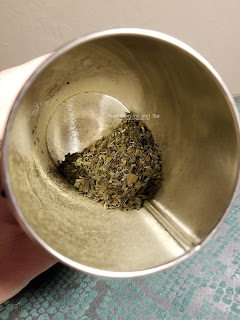 Overall, the Mint Guayusa from Runa made a very pleasant cup. I enjoy mint-flavored drinks, and this one provides a really nice hit of caffeine to accompany those minty notes. If you enjoy traditional guayusa (or mate or yaupon), give Mint Guayusa a try! On my personal enjoyment scale, I would rate Runa's mint guayusa a 4.