Fueled by the power of tea (and maybe a bit of sleep), we have returned to our regularly-scheduled content, plus some new content, as we ramp up toward the 2017 SF Pen, August 25-27! (Click here for more details.)

This week's review covers a type of caffeinated "tea" that has not been previously featured on Built from Ink and Tea - guayusa. Guayusa, a plant native to South America, is closely related to mate and yaupon (all three are types of holly trees). Not strictly tea in the sense that it is not from the camellia sinensis plant, guayusa nonetheless has a lengthy history of use in making medicinal infusions in hot water and being consumed for its stimulating effects. What I am drinking this week is traditional, unflavored guayusa by Runa, a brand who is doing much to promote the benefits and consumption of this plant. 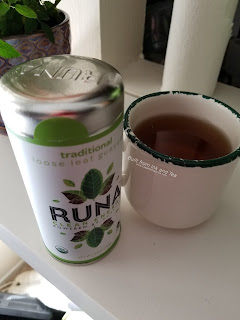 I used my Adagio TriniTEA to brew four cups, using a teaspoon of guayusa per cup, steeping for five minutes. The resulting infusion provided a nice dark color, like a roasted oolong's steeping would. The aromas from the brewed guayusa are deep and earthy. Unlike the earthy aromas of a pu'erh, these are more green and woody. The aroma reminds me of a deeply-intense version of the smell of some wood or underbrush. If one could concentrate the smell of a vine or non-floral plant, it might be close to the aroma of this traditional guayusa. The aroma contains a lot of "green." 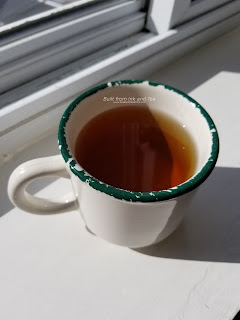 My first sip contains so many different flavors. I notice first a slight bitterness on the edges of the flavor. Not heavy, it is a light bitterness akin to slight tannin in black tea. Next, the flavors of the main body arrive with bold notes that are verging on being rich, if they were not so green. And green they are, carrying green flavors throughout, albeit with roasted notes, akin to a roasted green tea. Third, an interesting sweetness lays in the undertone of the drink. It is very faint, yet even in the aftertaste, there is a sweet aspect to the roasted green flavor. 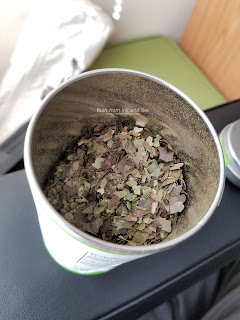 Overall, I really enjoyed my first experience drinking guayusa. It reminds me of mate and yaupon (probably more the latter) and for good reason, given their relationship. I highly recommend giving Runa's guayusa a try, and it conveniently comes packaged in both teabags and loose leaf formats. On my personal enjoyment scale, I would rate Runa's traditional guayusa a 5. I will definitely be purchasing more, when I finish this container!