Coconut, cinnamon, ginger, cardamom, and lemongrass...ingredients for tasty food, but also ingredients for a hopefully-tasty tea. This weeks's tea review takes a look at Adagio Teas' Thai Chai, a black tea blended with all of the above ingredients, comprising a strong cup of flavor. Just reading the ingredients reminds me a bit of last week's review of DavidsTea's Coconut Oolong, but I have a feeling that the cinnamon and ginger are going to make for a vastly different flavor with this tea.

My first surprise came, when I read through the brewing instructions. Adagio recommends two teaspoons of tea per cup and a five minute steep time. Sounds like a strong cup to me, which therefore sounds delicious! I add four cups of water and eight teaspoons of Thai Chai to my Adagio TriniTEA brewer, set it for black tea and a five minute steep time, then wait. While the tea brews, I smell the tea container to see what the dry blend is like. The ginger aroma is really prominent, but the notes of lemongrass are surprisingly strong, too. 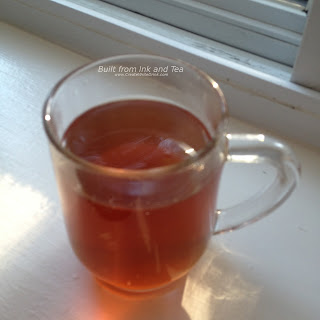 The first cup pours dark, most likely cloudy from the ginger and cinnamon. The aroma, which I anticipated would continue to highlight the ginger and lemongrass, seems overwhelmed by cinnamon. Ginger and lemongrass notes now sit in the background. This is a surprising turnabout, and I take my first sip to see the results of this intense brewing. Immediately, I get flavors of cinnamon and black tea hitting my tongue. A certain heat from the ginger is present, and some sweet herbal notes of lemongrass are noticeable. The cup is intense. The large amount of tea combined with the moderately long steep time resulted in a heady brew. In the body of the tea, the cardamom can be noticed, lending a bit of spice, alongside the ginger. I feel as though the coconut probably smooths the flavors a bit, though it is not as prominent as the other flavors. Due to the five minutes of steep time, the black tea base has just the slightest touch of astringency.

I could imagine brewing this tea and actually making a chai of it (with milk and sugar). The milk might tone down the spices, and the sugar would highlight some of the notes that are otherwise overshadowed by the tea's heat. The black tea itself would have its astringent edge removed, and the cup would probably be full of smooth intensity.

On my personal enjoyment scale, I would rate Adagio Teas' Thai Chai a 4. I quite enjoyed my cups of it, and I could see it being a very versatile tea that would appeal to a wide variety of palates. The ingredients are blending quite well, and the steeping instructions provide for good flavors all around.