This week, we take a look at (and a sip of) Peppermint Bark, a green tea from Tea of Life's Peppermint Collection. Packaged in its pyramid-shaped cardboard container, the tea sachet itself is not pyramid-shaped, as we discovered in last week's review of Black Tea Cinnamon Mint from the same collection, which you can read here.

To emulate peppermint bark candy, Tea of Life has combined green tea with cocoa pieces, licorice pieces, peppermint leaves, and flavors of coconut and peppermint. Some of those ingredients are fascinating, such as the licorice pieces and coconut flavors! The dry tea blend gives off a smell of mint and a bit of chocolate, though mostly mint. Oddly, I actually find the mint to be a bit reminiscent of menthol, rather than peppermint. Maybe that is due to the inclusion of something else, like the licorice, which I did not specifically smell. The aroma is slightly sweet, which adds a pleasant touch, but there is something about it that is not quite ideal. 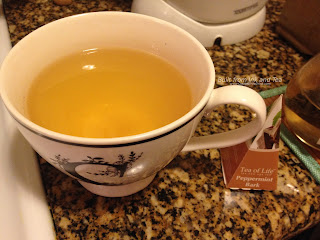 I steeped the tea sachet for four minutes, using water that had been brought to a boil before being allowed to cool slightly. The resulting cup...smelled like the menthol-peppermint-slightly cocoa concoction that was suggested by the dry leaves. I took a sip and was slightly surprised. While the flavor absolutely matched the aroma, the was not that bad. In fact, I moderately enjoyed drinking the rest of the cup.

On my personal enjoyment scale, I would rate this tea a 2. While the cup did taste okay, the overall composition was a bit strange. To me, it did not taste like peppermint bark, and I think I might have enjoyed a mint green tea more than the menthol-like mint in this blend. For a tea blend that intends to taste like a chocolate candy, I think the lack of sweetness - and minimal flavor of chocolate or cocoa - really detracted from the effort.


Photo credit to Built from Ink and Tea.
You may be able to find this collection in some department stores around December. Tea of Life does not appear to have a retail website.
This review was unsolicited and uncompensated.
You can read more about my Personal Enjoyment Scale, here.
Text is copyright 2017, Built from Ink and Tea.