In the past, I have discovered that - outside of the United States - Lipton offers a number of teas that are of a much higher quality than their run-of-the-mill, dust-like attempt at black tea, which they sell all over the United States. (If it sounds like I have a bias, it is because I certainly do...for as inexpensive as tea can be, I find it unfortunate and a disservice to tea drinkers to offer such a low-quality brew.) The "higher quality" is of course relative to what is being mostly offered here in the United States, and it is possible that the tea I will be reviewing today has been imported and is available here. However, in hunting grocery stores, I have not been able to find it. A quick search of Amazon reveals something called "Daring English Breakfast," which can be ordered here State-side, but I am not sure if it is a separate offering from today's review or simply a re-branding.

Today's review covers Lipton's English Breakfast, advertised as "Exclusive Selection" on the package. From their marketing website, this seems to suggest a line aimed at businesses with "quality you can see." This marketing toward businesses fits with the fact that I picked up this teabag at a hotel in the Netherlands recently.

Opening the teabag, I feel as though I cannot see much of anything. The pyramid bag is fairly translucent. However, the tea in the bag feels as though it has been ground pretty fine. It also has the same smell of generic Ceylon as the Lipton Black Tea one finds here in the United States. 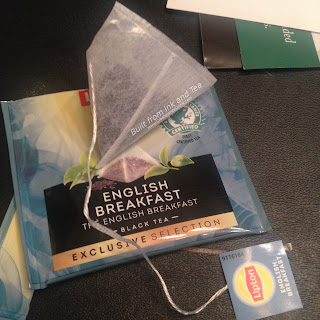 Following the steeping instructions (which had very communicative pictures), I poured a cup of just-boiled water over the tea and left it for two minutes so as not to risk over-steeping. Once the steeped cup had cooled, I prepared for tasting. The aroma of the tea smells to me like a typical English Breakfast, albeit a bit flat and unremarkable. 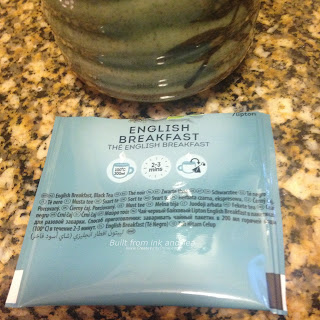 My first sip almost surprised me. For a moment, the tea seemed like a nice, smooth, flavorful cup, while it was on the tip of my tongue. Then, it washed over the rest of my mouth, and the astringency came through. At least the tea is drinkable. It could probably be doctored with milk and sugar and be less harsh. I also feel as though my two-minute steep time was such that the tea should not have gotten oversteeped, which leads to me to believe that the quality of the leaves led to it being this bitter. The flavors almost have a bit of complexity to them, though not a lot. There is a touch of malty flavor that hints at an Assam, or it could be that they are using a rather robust Ceylon. (South Asian teas are an area in which I wish I knew more!) 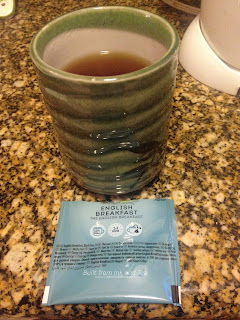 If this tea were available to the public, I would say that it would make a great alternative to the Lipton Black Tea that is sold in grocery stores. It could be used for making very inexpensive iced tea and would likely produce better results than other, cheap black teas. However, I think that in all tea brewing, there is no substitute for decent - if not good - quality leaves. On my personal enjoyment scale, I would rate this tea a 2.