A good friend gave me this Peppermint Tea Collection from Tea of Life, and I felt that it would be an excellent selection to review here on Built from Ink and Tea, especially considering that I am entirely unfamiliar with the company from which it came! Looking at one online retailer of this brand, they certainly do have a lot of options. This box set of twelve tea sachets comes with four different blends, and today we are reviewing the first, Black Tea Cinnamon Mint. 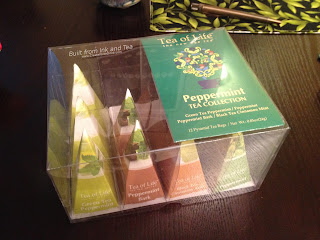 I have to admit that I have doubts about this tea, even before drinking it. I typically do not mix cinnamon- and mint-flavored drinks or foods, but I suppose that the heat of one and the coolness of the other could provide a pleasant contrast. I boiled some water and poured one cup of just-boiled water over the tea sachet in my mug, steeping it for five minutes (the upper end of what the package recommends). My first surprise? The sachets are not pyramid-shaped, like the small cardboard boxes are! I had anticipated a shape more akin to Tea Forte's pyramid-shaped tea sachets with their leaf string.

The aroma of mint is pretty prominent in both the dry tea and the brewed cup. However, it is in the brewed cup that the cinnamon really becomes noticeable, having not smelled very strong before steeping. With a Ceylon black tea base, the aroma of this blend does not feature much of the actual tea. However, my first sip exploded in a cacophony of flavor. While in some cases, such a description might be a good thing, I am not so certain, here. 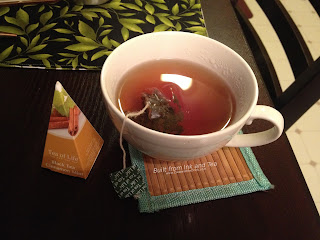 Five minutes was far too long for the Ceylon tea base. That was my mistake. However, the cinnamon and mint tasted strong enough to cover for the black tea. The cinnamon provided more of a vague flavor than any heat, but the mint did actually add some coolness.

On my personal enjoyment scale, I would rate this tea a 2. There is a lot of potential with a combination like cinnamon and mint with a black tea, but the execution feels poor. Even when I had another cup, steeped for a shorter period of time, the tea tasted fine but the flavors of cinnamon and mint were weak. Perhaps Tea of Life needs to look at the blend ratios on this one.


Photo credit to Built from Ink and Tea.
You may be able to find this collection in some department stores around December. Tea of Life does not appear to have a retail website.
This review was unsolicited and uncompensated.
You can read more about my Personal Enjoyment Scale, here.
Text is copyright 2017, Built from Ink and Tea.
Posted by Spencer at 10:00 AM