Welcome to December! This week, I wanted to provide a contrast - potentially a sharp one - with the tea that we reviewed last week, Whispering Pines Tea's Wild Grey. With Wild Grey being described very specifically as a "very lightly flavored" Earl Grey blend (a statement that proved very true in the drinking), I decided that the ideal contrast wold be a tea that takes this bergamot and black tea combination to the next level of intensity. There was no subtlety here: The Republic of Tea's Earl Greyer.

In an attempt to produce "the best tasting Earl Grey available", The Republic of Tea has blended their bergamot oil with a base of Ceylon black tea. While this might sound standard for Earl Grey, they have tried to use the best ingredients available - and up the ante on the bergamot oil. The loose leaf has a kick to it! Higher intensity on the aroma, though, does not necessarily translate to higher intensity on the flavor, as we found last week. Steeping a teaspoon of tea for four minutes in eight ounces of just-boiled water produced the cup that is going to reveal all! 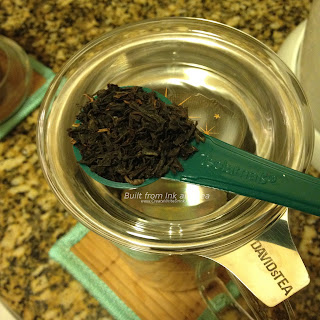 The bergamot aromas in this blend smell strongly enough that the underlying tea has been unfortunately hidden. While I typically do not mind the base tea in an Earl Grey blend being subdued or hidden, given that I drink it for the blend of bergamot with tea flavor, I was curious to gain an understanding of the profile to be expected with the Ceylon used in The Republic of Tea's Earl Greyer. The steeped cup gave off a most intense smell of bergamot, which seemed heavy, dark, biting, and strong. In some respects, the citrus aroma reminded me of a malty, strongly-steeped black tea, almost like an Assam. While this might sound like a bad thing, it did not feel negative in this instance. 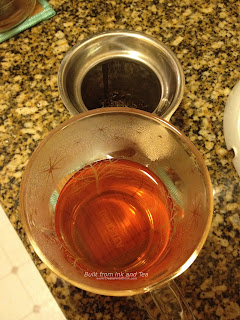 In sipping this tea for the first time, the bergamot surprisingly does not overwhelm me nor the flavor of the tea. Certainly, it does taste very strong, but it blends well with the Ceylon, which is now noticeable. I find the bergamot in this blend to be very robust and full in flavor, expansive rather than overpowering. It encompasses the whole of the cup, as if to remind you that "Yes, this IS an Earl Grey blend that you are drinking." Overall, it is a fairly pleasant effect and certainly not common. The tea finishes with an aftertaste reminiscent of the cup itself, flavors of black tea and bergamot oil lingering in the throat. 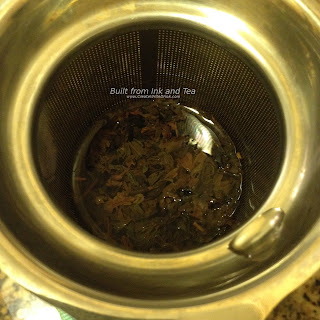 For the contrast we got from this week's tea and last week's tea, I never sensed competition. Instead, these two teas cater to two different groups of Earl Grey drinkers: those that prefer a lot of bergamot and those that prefer a little. For the Venn Diagram-like overlap between these groups, comprised of folks who simply love Earl Grey, these two teas will be treats. But as it regards The Republic Tea's Earl Greyer, I would rate it a 5 on my personal enjoyment scale. Prepare yourself for the experience with this one - and enjoy.

Photo credit to Built from Ink and Tea.
Republic of Tea's Earl Greyer Black Tea is available in bags from their website, here and in loose leaf from their website, here.
This review was unsolicited and uncompensated.
You can read more about my Personal Enjoyment Scale, here.
Text is copyright 2016, Built from Ink and Tea.
Posted by Spencer at 10:00 AM