As I prepared this week's tea for review, I realized that this might be the first time I have brewed the review tea in my Adagio TriniTea, rather than manually brewing it. While I have had my TriniTea for some time (this model is no longer being produced), I tend to use it more during the day than when brewing tea for myself to review. That said, with various celebrations and events, brewing four cups of tea at once (while not having to touch it, except for setup) was ideal. (Watch for a future review of the TriniTea!)

This week's tea for review comes from DavidsTea and has a lot going on (much like many of us, as we approach the end of the year). In the title of this post, I classified The Skinny as an oolong, and yet this tea blends oolong with pu'erh tea, plus adds ginger, orange peel, and eleuthero root (a known stress-reliever). If that sounds like it might be a bit intense - it is. 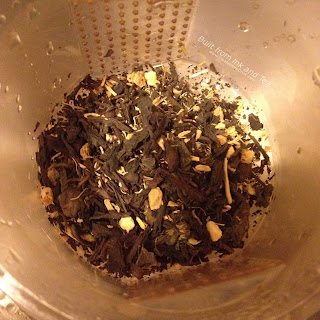 My first smell of this tea shocked my nose at the strength. Especially due to the ginger, the tea gives off strong spicy and earthy tones. The pu'erh certainly contributes to this aroma. Once brewed, the cup has an earthy smell, still, but I can also smell notes of something slightly-sweet (perhaps the ginger, toned-down slightly) and herbal (likely the eleuthero root, not a scent I have encountered before).

DavidsTea recommends one and a quarter teaspoons per cup, steeped for four to seven minutes. Since I was making four cups, I used five teaspoons, then chose to brew a stronger tea and steeped the leaves for six minutes. The water used should be at an ideal temperature for oolong teas, just short of boiling. Steeping the tea for six minutes resulted in a dark cup, which looks strong to me (just as I wanted). The aromas, though, are not overpowering. 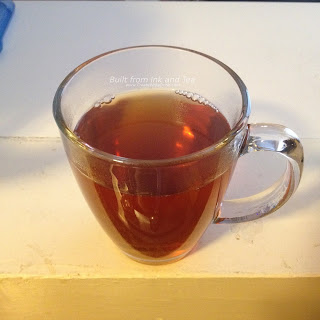 The first sip brings a flood of flavor. Six minutes seems really ideal to me, as I can clearly taste the ginger (without it being too powerful), the citrus (from the orange peel, not too bitter), the eleuthero root (or what I assume is that flavor)...and a bit of tea? As I continue to sip, I enjoy the flavors, but I wish I could taste more of the tea itself. The pu'erh is noticeable, especially in the aftertaste, due to its earthiness. However, the oolong, except for a few roasted notes, seems overpowered/overshadowed by the other flavors.

On my personal enjoyment scale, I would rate this tea a 3. I appreciate what DavidsTea tried to do here, combining oolong and pu'erh, and I really like the pu'erh plus ginger mixture. However, I think that the tea blend lacks balance, unless the intention is to not showcase the tea itself.