Today's tea review comes from WymmTea, who I have never before review on Built from Ink and Tea. Welcome, WymmTea! The tea itself also arrived with a bit of background, which I found to be quite intriguing. The WymmTea website describes it well:


The name Laohuangpian literally means “old yellow leaves” in Chinese. The picking standard of pu-erh tea has been 1 bud, with 3 to 4 leaves. Usually the 3rd and 4th leaves’ shape are not as ideal after processing. For the best aesthetics of final product to the consumers, tea farmers usually filter out these bigger leaves so that the remaining ones are neat and symmetrical when pressed into pu-erh tea cakes. These bigger leaves are often kept by the tea farmers themselves and are rarely found in the market. Unknown to the general public, these larger and plumpish leaves are more flavourful and sweeter as it has been grown on the trees for a longer period of time.

So, for aesthetic reasons, this tea rarely if ever sees its way into the hands of consumers! Yet at the same time, this tea is certainly being consumed and enjoyed. 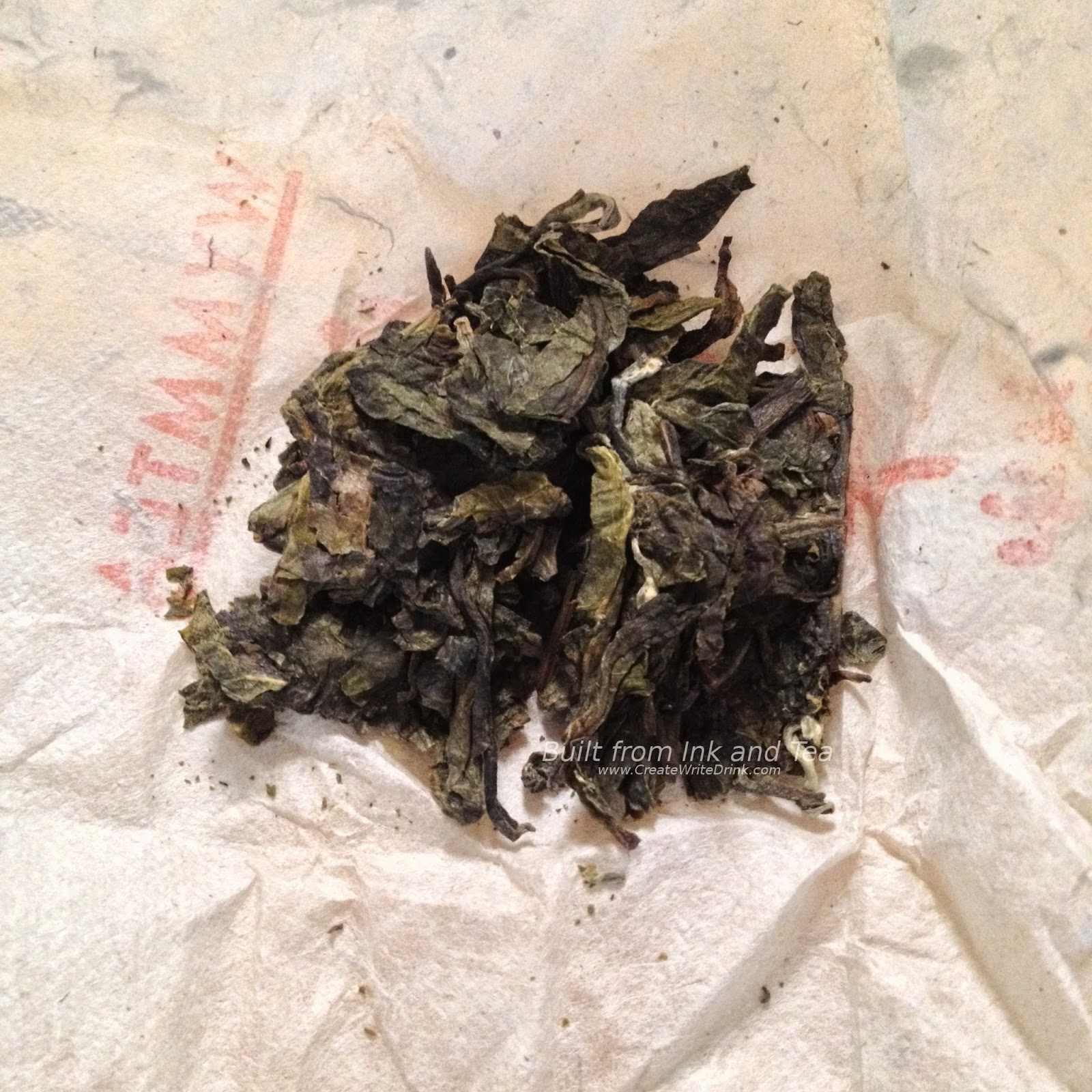 I began my own tea session of enjoyment by boiling some water, adding leaves to my gaiwan, and giving them a very short, ten-second rinse. The washed leaves gives off the aroma of dark vegetation, a bit grassy, but also a bit stronger. Two things surprise me. First, the aroma of this sheng does not have the bite that I have come to expect in the smell of raw pu'erhs. Second, notes of sweetness lace through the aroma, and I smile at this complexity. More water is poured over the leaves and the first steep begins. 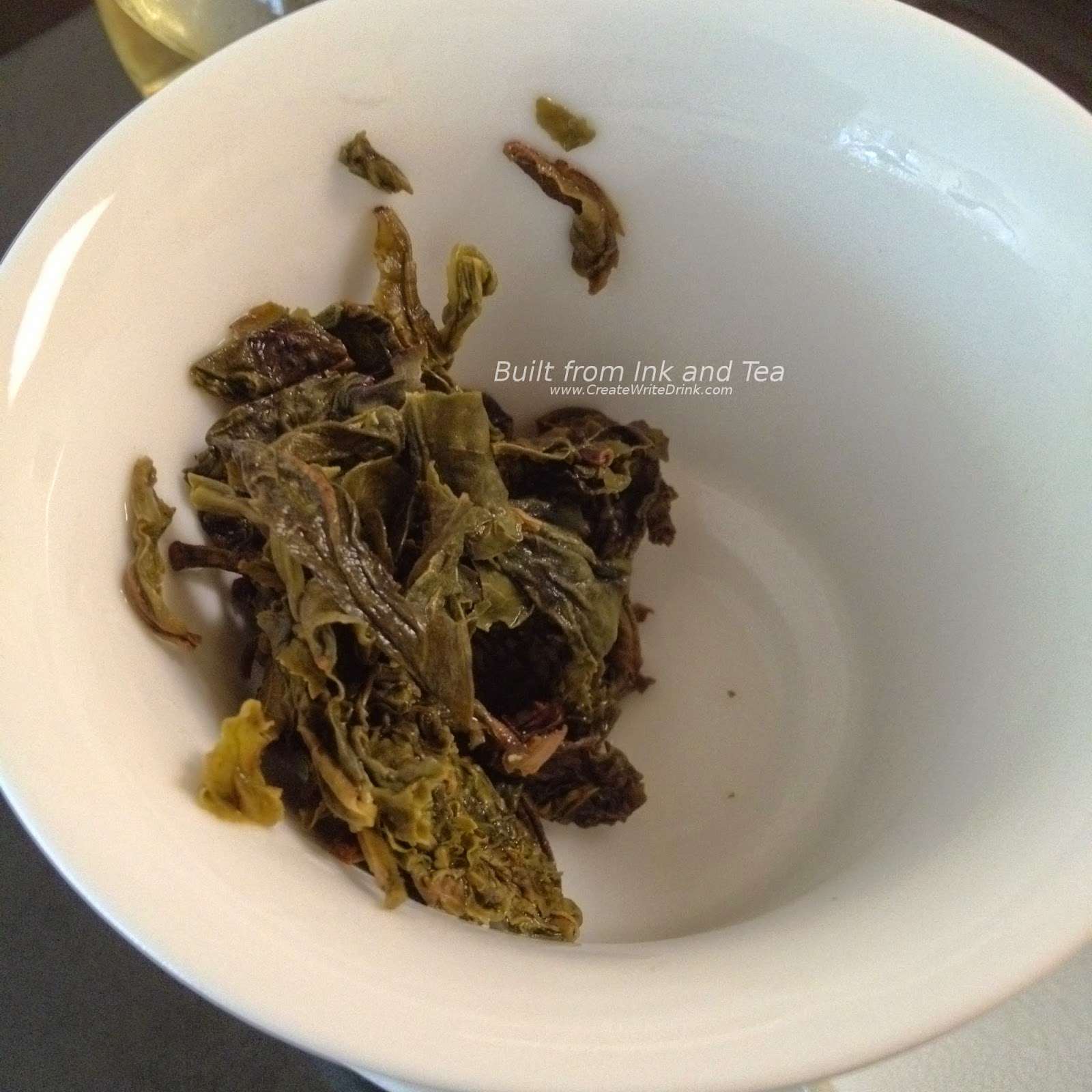 Thirty seconds later, I have a cup that smells quite mild. My first sip agrees with this assessment, the flavors having not yet fully blossomed, but the pale yellow liquor contains some grassy flavors, which remind me of a pleasant green tea mixed with a sheng. As I consume this first cup, I begin another thirty second steep for the second cup. Much like the first cup, this one is so very, very smooth. The flavors are a bit bolder, but they maintain the same profile overall. 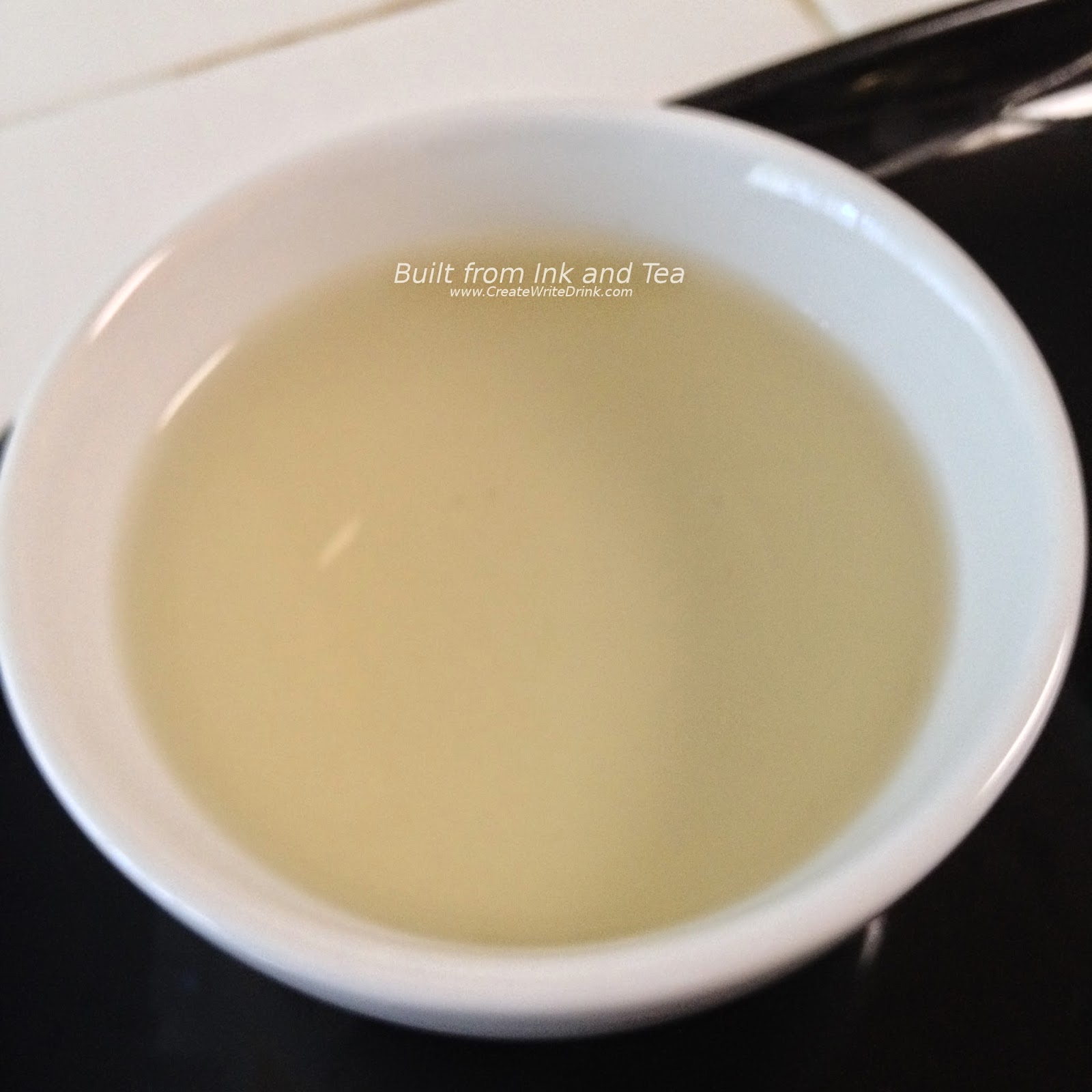 In my third cup, which resulted from another thirty-second steep, I note that the sheng flavors have come forward. Those green, aromatic, almost-pungent (in a good way) tones that so often fill sheng pu'erh have reared their heads and now lurk in the body and aftertaste. Steep number four (another thirty seconds) reveals those flavors to an even greater degree. The dark vegetation aroma is warm and soft, yet seems full of vigor. Much as I am also enjoying them, these cups are being consumed quickly. 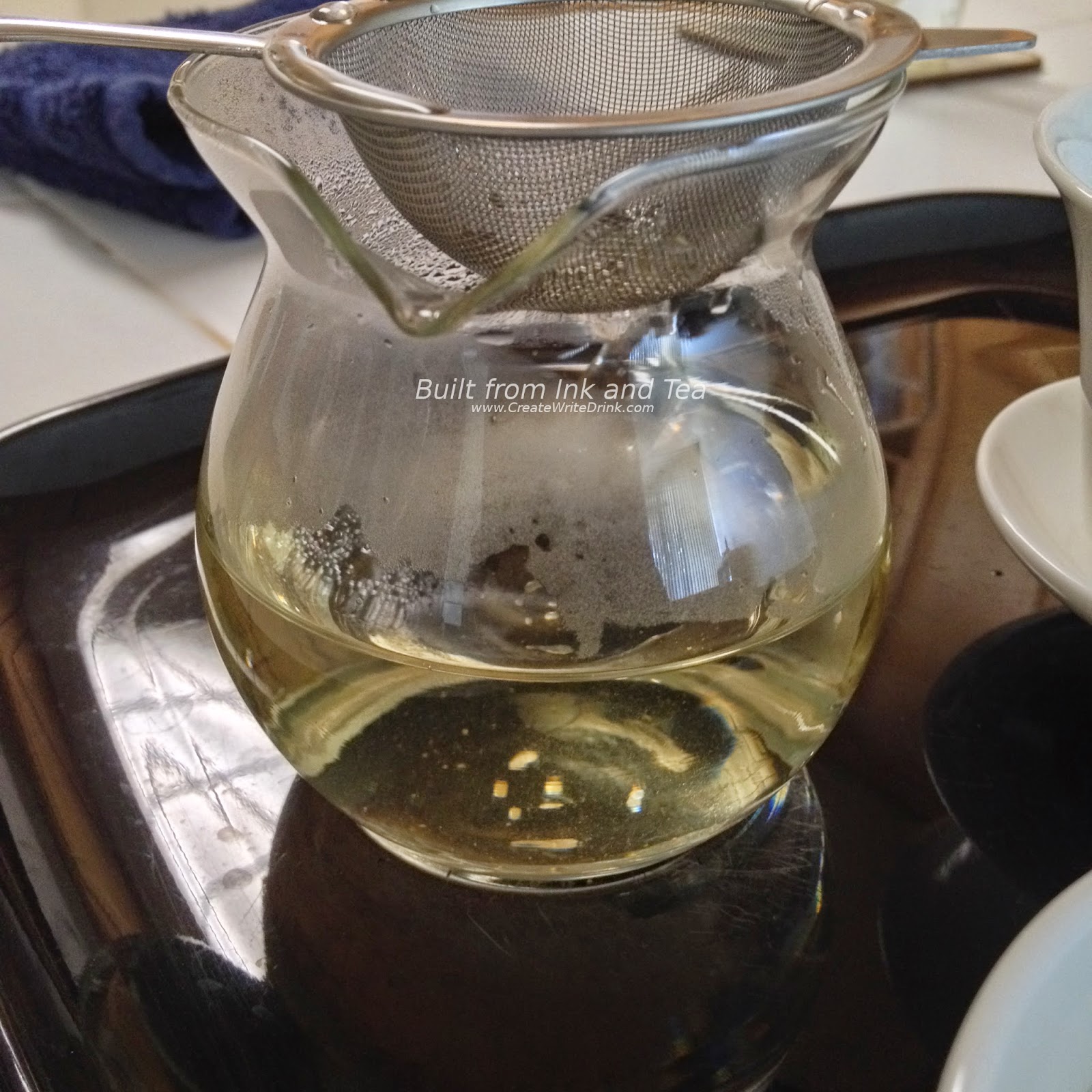 During the fifth steep, I accidentally lose track of time, so the steep was somewhere between thirty seconds and one minute. As a result, I am left with what I assumed would be a strong cup, based on the darker color. Yet, to my surprise, it is just as pleasant as the other steeps, though the finish seemed weakening. The leaves appear to have been mostly steeped-out. 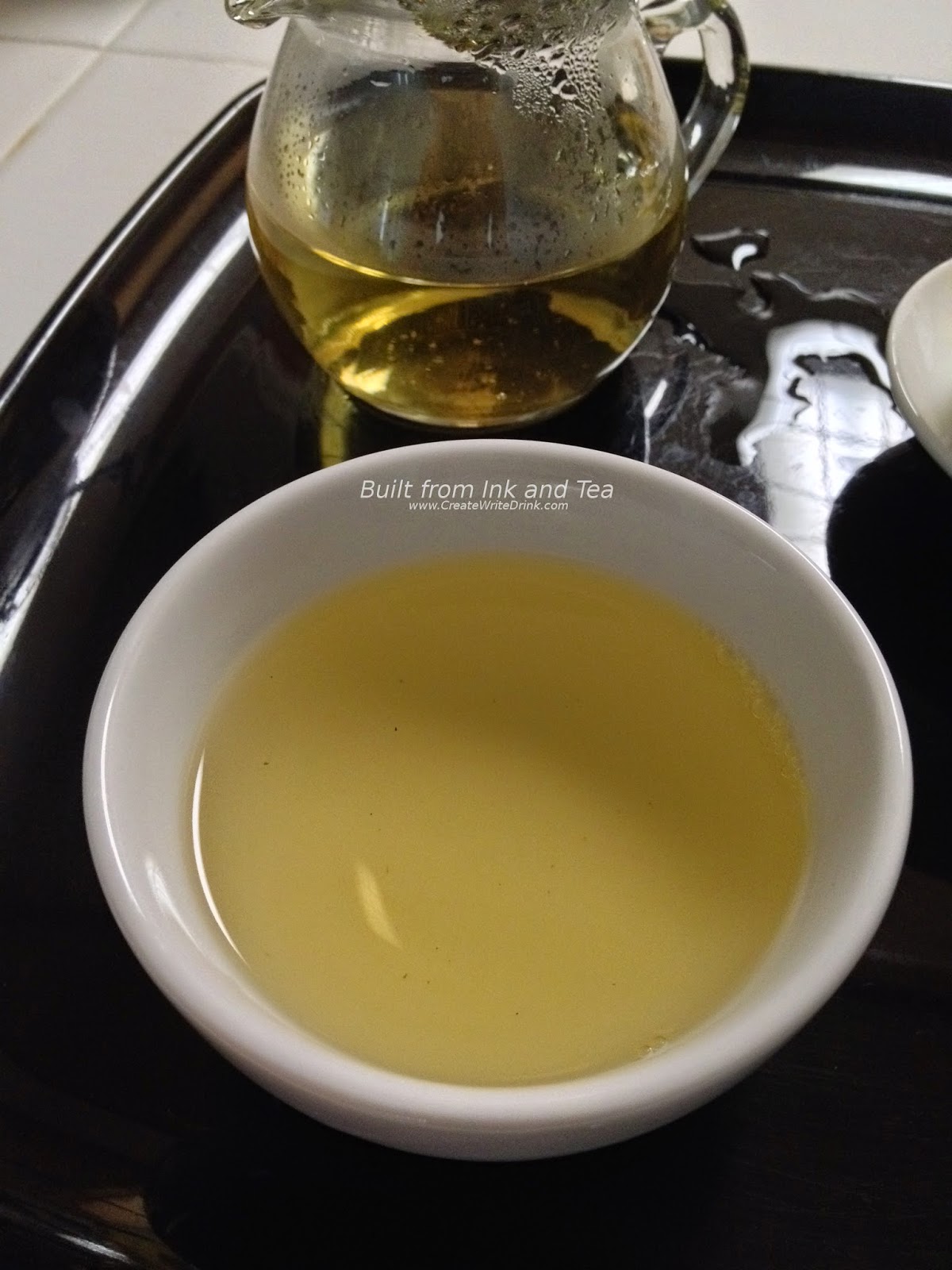 In an attempt to express the extent to which I enjoyed this sheng tasting, I can only say that 95% of the time, I prefer shou pu'erh over sheng, and I rarely choose sheng pu'erh as a drink during the day. However, with this tea, I could see it becoming a regular in my cup. On my personal enjoyment scale, I would rate this tea a 95/100.