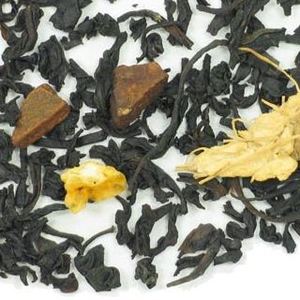 My first impression of this tea was "Wow! What an aroma!" My second impression was "This is definitely something new and pleasantly different." The tea in question was Adagio Teas' Gingerbread, a black tea that was very different than other spiced black teas of my past tasting.

I began with a simple steep - three minutes of a teaspoon of this tea in a just-boiled cup of water. The aromas that hit my nose, as the tea brewed, focused mainly on the cinnamon bark and "gingerbread flavor." In a way, I was quite thankful. My past experiences with teas containing cinnamon and orange peel have usually resulted in brews, where the orange is far too strong and the cinnamon very subdued, both accompanying an overly bitter black tea (bitter on account of how long it took to get any sort of non-tea flavor to evolve). With the addition of gingerbread flavor and ginger root, this tea moved beyond the traditional orange and cinnamon spiced black tea.

In Adagio's Gingerbread, orange peel took a back seat in the vehicle of flavor that drove across my tongue with my first sip. Despite all of the bold additions to the tea, I found that the resulting brew was not overly strong, instead containing a pleasant mixture of all of the flavors. Warm cinnamon swirls around the outside of the flavor palate and the ginger root adds a slightly sweet bite to the main part of the body - the Ceylon black tea. The lack of heaviness to the tea helped it go down smoothly, and I found myself drinking it far more quickly than I had anticipated.

This black tea was not especially re-steepable, but I typically do not expect such from black teas, especially flavored ones. For my first few cups (and pots, over several days), I did not sweeten it at all, as it has a bit of natural sweetness. Upon the addition of a small amount of sweetener, I found that more of the orange flavor came forth.

Well done with this holiday tea, Adagio. I will gladly drink it any time of the year. On my personal enjoyment scale, I would rate this tea an 87/100.

This black tea is available from the Adagio website, here.
Photo credit to Adagio Teas.
This review was unsolicited and uncompensated.
Posted by Spencer at 10:00 AM