Following on the dregs (rather than the heels!) of last week's review of Pu Erh Dante from Adagio Teas, another of their unflavored pu'erh teas is filling the cup this week for our review. This shou pu'erh promises "clean, woodsy aroma" and "wilted flower notes and a faint dark chocolate texture". To me, the description Adagio provides seems to suggest flavors that might be a bit milder than Dante. I have started brewing the water and am eager to find out!

If you have not already, I recommend reading last week's post, here, where I briefly summarize Adagio Teas' pu'erh offerings and dive into a cup of Pu Erh Dante. Likely, I am going to make some comparisons, throughout this post, since at first glance they do not seem to dissimilar. To begin, with Pu Erh Poe, I followed the same brewing instructions as I did with Pu Erh Dante, a more Western-style brewing of one and a half teaspoons of loose leaf in twelve ounces of just-boiled water. Adagio recommends three to five minutes, and I went with five. In part, this was due to my preference for stronger tea, but also I accidentally steeped the cup of Dante for that long, as well, so I want them to be fairly equal as far as strength. 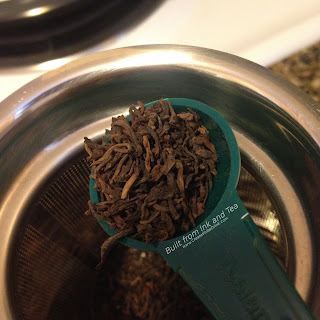 I love pu'erh. Even the aromas of a cheap pu'erh will make me smile, as the earthiness wafts my way. Smelling Pu Erh Poe, I put my nose almost into the bag, breathing deeply, and the aromas that fill my nostrils are gentle and soft. They seem almost like a woodsy blanket, as if the smell of this tea was the aromatic embodiment of a cotton blanket - not too thick and not thin, like a sheet might be. I agree with Adagio's "warm hay inside a barn" description, and this is where I noticed one of the differences from Dante: Poe smells more dry. Now, of course the leaves are all dry, until you steep them, but the smell itself seems drier. Taking a few more deep breaths of Pu Erh Poe, I think I smell faint floral notes, and I am curious to see if they manifest themselves in the flavors. 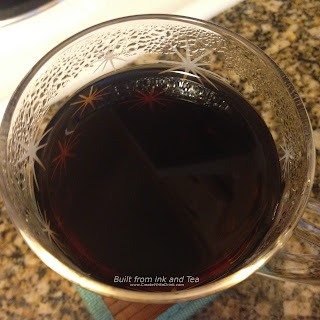 I smell the brewed cup, when the steeping is done. I frown. An eyebrow raises, questioningly. The tea smells muddy. While not entirely unpleasant, muddy aromas were not what I was expecting, nor were they what was suggested that I might expect. For that matter, muddy aromas do not comprise my typical experience with pu'erh, so these were certainly a cause for me to wonder. I took another moment to really breathe-in the aroma and try to break it down, mentally. The warm hay smell presents itself, and it still seems to make the aroma "dry." Faint floral notes touch the edges of the cup's aroma in much the same way that they did the dry leaves; there is little change with them. Woodsy mushroom aromas seem to tease the smell of the tea, suggesting their presence and little more. 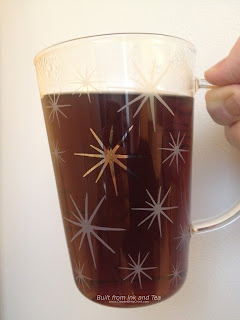 This may seem like a strange differentiation, but it is here that I think I might have hit upon the main difference between Pu Erh Poe (this tea) and Pu Erh Dante (last week's tea). Poe feels "woodsy," while Dante felt "foresty." The distinction is hard for me to put into woods, but let me try. Dante felt like a walk in a forest after a rain, all dark greens and browns everywhere, damp aromas filling the air, running the spectrum from deep and wet-earthy to high and sweet and wet-mushroom-like. Poe feels like laying on the earth, deep in some woods, surrounded by silence, a dryness filling the air, while the smell of soil and trees and a distant meadow of flowers reaches the nose, the body shrouded in an invisible blanket of stillness and of "presence." 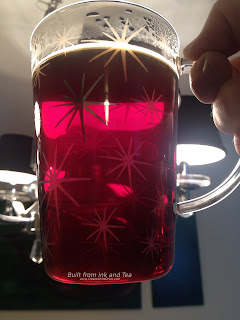 It took a moment, but my tongue finally located the flavors of the tea. That was strange, that for a brief moment, I did not taste anything, when I took the first sip. Then the flavors started dispersing across the tongue, and I picked-up on them individually. With my second sip, I focused on the tea as it settled. It tastes almost exactly like the brewed cup smells. Almost exactly. The aftertaste carries flavors that I do not recognize from the aromas. They seem more damp, more reminiscent of soft, damp earth. They also have with them some of the mushroom aspect. 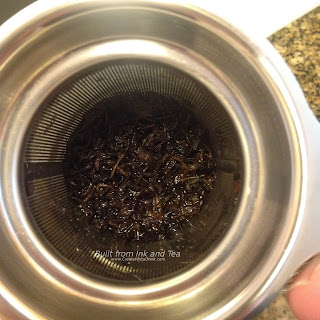 Despite the ramble above on the differences, I feel like Pu Erh Poe provides another great daily-drinking pu'erh, just like Pu Erh Dante did. I think each will have their own fans, who prefer one of the flavor profiles of one over the other. For me, Poe took about half the cup before I really "got into" it. The tea was enjoyable, but I think I preferred the more forest notes of Dante. On my personal enjoyment scale, I would rate Pu Erh Poe a 3.