When I first read the packaging on this tea, I noticed that the recommended amount of tea per cup of water was "1+ tsp." In numerous past tea reviews, I have mentioned how much I liked being able to steep strong cups of tea that are not bitter. From the moment I read that, I knew this was going to be intense and a delight to drink. 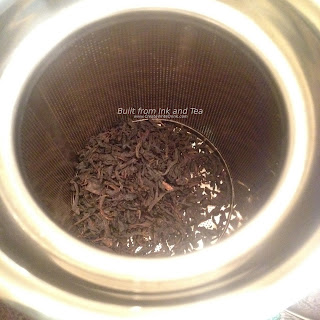 I began by boiling water and steeping two teaspoons of Baker Street Afternoon Blend in twelve ounces of water for four minutes. The combination of that much tea and the time was probably pushing into risky territory for this blend of Keemun, Darjeeling, and Lapsang Souchong. While my tea steeped, I smelled the dry leaves in their package. Though Upton said that there is just "a bit" of Lapsang Souchong, the smoky aromas rolled heavily from the package to meet my nostrils. Even just a bit was enough to overwhelm any scents from the Keemun or Darjeeling, both of which are rather light teas. I am hoping they show themselves in the flavor.

The aromas rising from the steeped cup embody anything but mellowed. Strong and solid black tea flavors have risen to accompany the Lapsang Souchong, and this is one smooth cup. The Keemun and Darjeeling have built a solid, smooth, and light-flavored foundation upon which the smokiness of the Lapsang Souchong stands. However, that smokiness surprisingly does not overwhelm the other flavors. I can very distinctly taste the almost-green and light notes of the Darjeeling, and the Keemun settles as a really nice backdrop to the Lapsang Souchong. 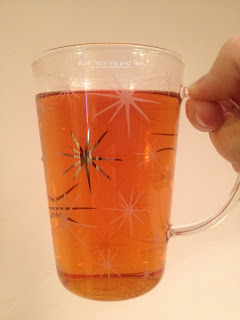 I really enjoy Lapsang Souchong, yet I know that the flavors can be overwhelming for some folks. I highly recommend giving this blend a try, both for lovers of Lapsang Souchong and also for those who might be a bit more apprehensive about jumping straight into the full smokiness. For me personally, Baker Street Afternoon Blend provides fresh character to a favorite set of flavors. On my personal enjoyment scale, I would rate this black tea a 5.