Following on the heels of our review of Gourmesso's Black Infusion tea capsules, we had a strong desire to try the rest of their tea lineup. The next to be brewed was the Green Infusion.

Gourmesso made identifying the tea used in their Green Infusion pretty easy. Their description from the box specifically says, "This gunpowder green tea is made from tightly rolled leaves, delivering a powerful yet smooth finish." Personally, I love a good cup of gunpowder green tea. Years ago, when I first started drinking tea, green teas were some of my favorites, and gunpowder was at the top of that list. Without having tasted the tea yet, my initial impression is that Gourmesso made a good choice in selecting gunpowder for their green tea capsule. It is one of the hardiest teas I have encountered, able to withstand some pretty hot water, and it brings a strong flavor to the cup.

However, the time has come for some honest reaction. When I saw all of the rolled balls of gunpowder green crammed into the small capsule...it made me grimace. Given that gunpowder green is comprised of tightly-rolled balls of tea leaves, restraining them in a capsule instead of allowing them to open in an infuser basket (or other tea apparatus) does not make for a promising cup of tea. The water has less leaf area to cover. 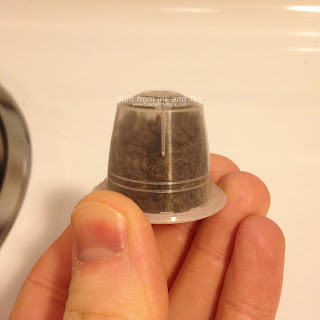 I started my tea preparatixon by running the Nespresso machine with no capsule to clear any coffee flavors or residue. Then, I inserted a Green Infusion capsule and ran the machine on the lungo setting, resulting in this half cup of tea. Once it cooled a bit, I thought back to gunpowder green that I had drank in the past. 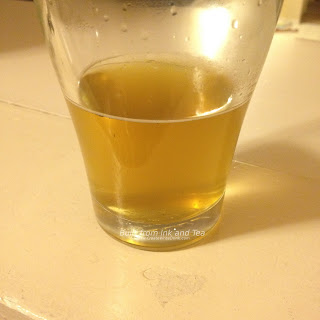 By comparison with other cups of gunpowder green I have had, this cup of tea smells quite strong. Likely, this is due to there being a larger leaf-to-water ratio, so that as the water passes over the leaves (versus sitting on the leaves, as in traditional tea making) it gathers more flavor. My first sip certainly tastes strong, too, with the flavors coating the tongue (not in a thick, artificial way). The finish surprises me, as it is rather smooth (relative to the strength of the tea).

It seems that my reservations were slightly misplaced. I drank the first cup of tea, then went to make a second. While the flavor did not stun me, the convenience matched rather well with the quality of tea that was provided. Well done, Gourmesso, for crafting another good tea option for Nespresso machine owners. Were I primarily an espresso-drinker, I would want to have some of this tea on hand for when I needed a change or when a guest wanted tea. (And I will certainly enjoy finishing this box of capsules.)