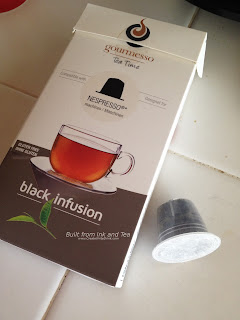 Today's tea review leaves the world of tea bags and loose leaf infusers, instead delving into an entirely different style of tea-making: the single-serving capsule. While Keurig machines have had tea options available for quite some time (including the "fill your own" style, which can be used with tea), other capsule-using intended-for-coffee machines have not had the same treatment...until now.

I have been following Gourmesso and their offerings for some time. They make espresso capsules that are compatible with the Nespresso Original Line machines, offering them at a cost lower than the official Nespresso capsules and with a quality that is a good value. Recently, Gourmesso began offering tea capsules, allowing owners of Nespresso machines to brew tea with their machine. And why not? The machines effectively take hot water and pass it over the contents of the capsule to make the drink. Now, this certainly does differ from the standard tea steeping in which the tea sits in the water and then is removed, but with enough tea leaves in the capsule along with enough space for the water to move between them the results are good! 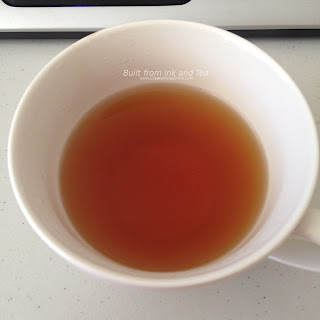 These capsules are meant to be used with your machine's lungo setting. It is highly advisable that you run the lungo setting without a capsule, first, to clear any coffee residue from the machine. Subsequently, I brewed a capsule of Black Infusion into my cup, providing me with a nice half-cup of tea. Gourmesso provides no information on the actual tea within their capsules, but to me it smells young and brisk, a plain-tasting black tea. With some milk and sugar, one might still maintain good results in this cup. However, for a tea drinker, there are many better options. This cup is drinkable, better than most bagged tea I have tasted, but nowhere near the top of my buy list.

I believe that Gourmesso is using their new tea capsules to target an espresso-only drinking audience, who may want tea on hand for the rare cuppa, for guests, or for recipes that call for tea. This has been a pioneering effort on their part, and I hope that it will drive more espresso drinkers to give tea a try.