Recently released as a part of the pumpkin-only second half of the DavidsTea autumn 2015 collection (alongside Pumpkin Pie Matcha and Pumpkin Maté), Spiced Pumpkin is a caffeine-free herbal blend, built on an delicious base of honeybush.

However, the delicious ingredients do not stop with the base! Mixed into the herbal blend are pumpkin pieces, cinnamon, cocoa shells, and maple crystals. The dry mixture smells heavily of the maple and cinnamon. Pleasantly, the pumpkin aroma is light - no pumpkin pie spice being used here! The cinnamon and maple are rather prominent. 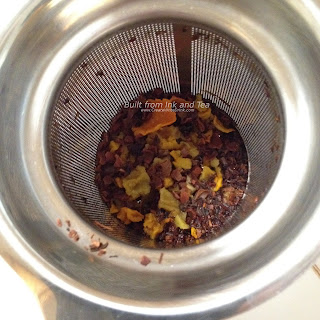 I enjoy my herbal blends, rooibos, chamomile, etc. rather strong and flavorful, so the two teaspoons of this mixture get steeped in twelve ounces of just-boiled water for seven full minutes (the upper end of what DavidsTea recommends). The resulting cup puts off an aroma that is much deeper, richer, and less sharply-sweet than the dry ingredient suggest. It does not smell like pumpkin pie, as there is no breadiness. Rather, it is a slightly-sweet, spiced pumpkin. The aromas seem a bit juicy to me, which intrigues and delights the senses. 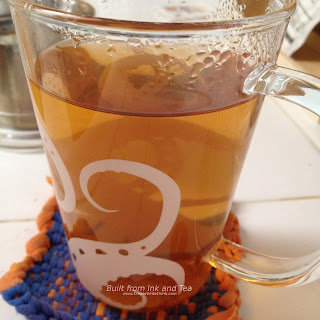 And juicy defines the flavor! What a rich treat! The richness is not too sweet, overwhelming, or bad; the flavors are simply quite full-bodied. Seven minutes was a perfect steep time for this tea. I find myself drinking it gulp by gulp, rather than sip by sip. The flavors are also rather spot-on for what DavidsTea was trying to accomplish. It does taste like spiced pumpkin. The sweetness is not too much, though one of my first thoughts was to wonder how it would taste without the maple crystals. Would the pumpkin be sweet enough to stand on its own?

That said, well done, DavidsTea for crafting a delicious pumpkin blend that breaks from the mold of pumpkin spice-centric beverages. On my personal enjoyment scale, I would give this herbal blend a 92/100.