A Review of the Hero 91 Fountain Pen

First Impressions (7)
The gold bands look clean, the clip at least appears to be quality, and the body is very rounded. Taking off the cap, I note that the nib looks huge, though it narrows to what looks like a very fine point. The plastic body looks really cheap. 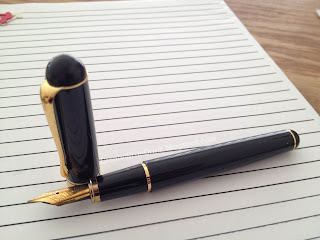 Appearance (6)
Starting at the end of the cap, I notice that, while most of the black plastic is glossy, the very end is actually a matte black. If it was for contrast, it was poorly done. The clip band is very thin, and the cap rings are consecutively bigger in two sizes, moving away from the clip. The look is nice, but oddly Hero has placed a dark, metallic ring between the two gold cap rings. It is really only noticeable, if one looks very close. The body is plain, and the same glossy plastic tapers just slightly toward the rear end, where another gold ring sits. This time, the small piece of plastic on this (rear) tip of the pen is the same glossy plastic. 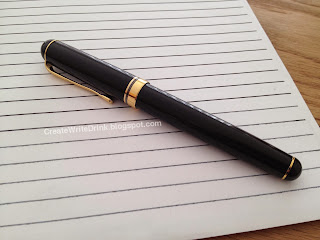 Design/Size/Weight (8)
The Hero 91 uses a snap cap, which is fairly easy to get on and off. The pen itself is larger, but not huge, and the grip is a consistent, tapering slope with no finger guides or sharp angles. That said, the step down from the body is fairly small/short but sharp. My thumb partially rests on it, when I hoold the pen, and it is noticeable, though not uncomfortable. For an all-plastic (except the converter) pen, the Hero 91 has a nice, moderate heft. Combined with the size, it allows for good movement of the pen and good control, while writing. 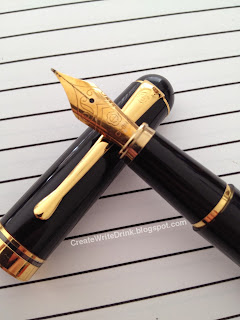 Nib (7)
The nib on the Hero 91 is large like the pen, all gold-colored, and simply designed. The fine nib probably equates to a Western extra-fine. While certainly no glider, a few weeks of use revealed that this pen is far from a scratchy nail - smooth enough to take care of business without providing too much feedback. 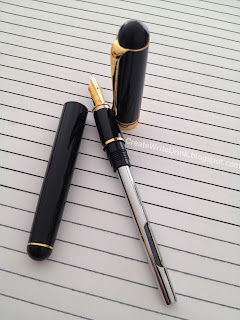 Filling System (7)
Okay, here we have one of Hero’s standard aerometric filling systems. Thankfully, this one is removable, which makes cleaning far less of a chore than otherwise. I would have preferred a piston-converter, but at this price, one can hardly complain. The aerometric works decently well.

Cost and Value (8)
Taking into account the larger body, grip, and nib, this pen is not for everyone. However, at $7 US, I found it to be very reliable and a great value. 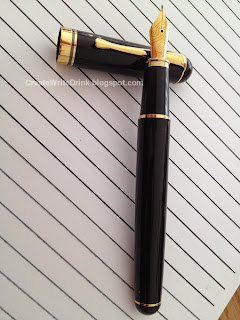 Conclusion (7)
(7.16 actual)
Unless one absolutely does not like the design or color, this pen is a great value and certainly a winner for sub-$10 US Chinese fountain pens. Give it a try, as there is little to lose.


This review was unsolicited and uncompensated.
The Hero 91 may be purchased from iSellPens, here.
Posted by Spencer at 10:00 AM