A Review of the Hero 59 Fountain Pen

First Impressions (9)
I think that first impressions play a huge role in the decision factor, when it comes to inexpensive pens, especially inexpensive Chinese pens. The (often true) stereotype says that the pen is probably going to perform equivalent to its cost. Yet that first impression may still drive someone to purchase such a pen. Certainly, there may be other reasons involved (there usually are for me). My first impression was what drove me to choose this pen: “Wow, for a Hero pen, that looks really good!” 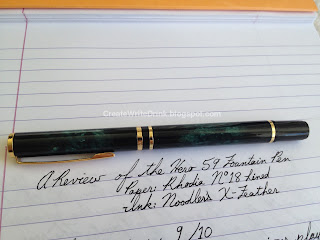 Appearance (8)
Typically, I am a pretty big fan of Hero pens, and their appearances are in general one of the reasons for that liking. In the case of this pen, it moved away from the generally “simplistic-yet-classy” style of most Hero pens, instead implementing a gold trim to accompany a green marbled look. While the marbling is somewhat flat-looking, when inspected closely (due to the pattern being printed), it is not overdone, is accented nicely by the gold, and does not carry a “cheap” look. 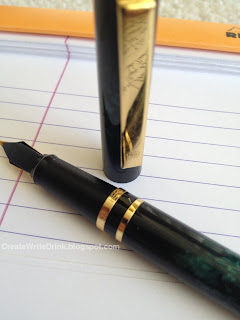 Design/Size/Weight (9)
The design of the Hero 59 is relatively straightforward. There are no surprises. The cap is a simple snap-on, and the clip is springy with decent flex. The grip is molded plastic with a (thankfully) low step-up to the barrel. Overall, the pen is relatively thin, coming close in over-all width to a disposable ballpoint. The rear end of the pen does bear an interesting feature. The plastic is such that it looks, as though it has an end cap that steps down from the barrel, slightly, but this piece is not removable. However, it does serve as a half-decent place to post the cap, holding the cap, there, though not tightly.

The Hero 59’s weight is decent. Capped, I realize that the cap itself contains most of the weight. The rest of the pen only has the slightest heft to it. With my fingers on the grip, the 59 is just long enough to sit comfortably in my hand. The barrel and section screw together smoothly and tightly. 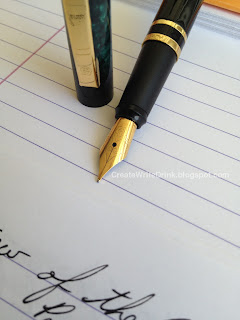 Nib (7)
Surprisingly, this inexpensive nib has a touch of flex to it, which was very unexpected. Aside from that, there is very little that surprises me about this nib. It is a bit rough with mediocre looks. 6/10, but I will give it an extra point for the flex.

Cost and Value (8)
At a retail price of $7 US, I would initially be inclined to say that this pen is at the high end of an acceptable price range, considering overall quality at first. However, it certainly matches the quality (if not exceeds) of many “school pens.” Perhaps it is worth that amount, if the pen matches the desires of the future user. 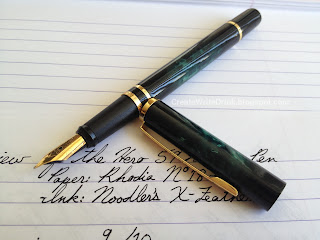 Conclusion (8)
As an inexpensive pen, the Hero 59 is a great option, especially for those looking to avoid the Parker 21-like look of some of the more famous Hero-brand offerings. The slight flex, marbling, and comfortable feel were all really positive aspects of this pen! 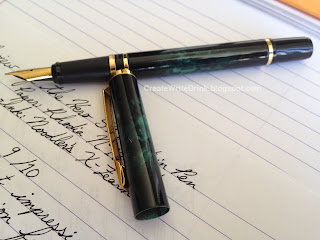