A Review of the Nemosine Singularity Demonstrator Fountain Pen 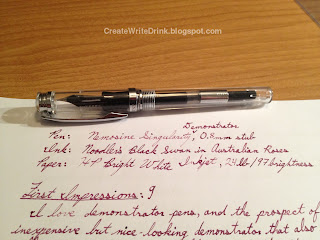 First Impressions (9)
I love demonstrator pens, and the prospect of an inexpensive but nice-looking demonstrator that also performed well was an almost-irresistable draw. When it arrive in the mail, I opened the simple but nice cardboard box, marked with the location of manufacture and assembly for the nib, body, and unit, as a whole. Sliding the pen from its place of rest, I was drawn to it by the clean and crisp lines. Eagerly, did I reach for some ink.

Appearance (9)
Faintly, the look of this pen with the clip style and branded cap accent band remind me of a certain demonstrator by a well-known pen company, though I cannot place just which exact company or model, right now. (Later edit: Perhaps, it looks a bit like the Monteverde Artista Demonstrator, at least, so far, as the cap and some of the body are concerned.) The Singularity appears to have a great deal of threading, as the threads (for the cap) on the section and those for the body are separated by only an accent band. The large nib looks impressive and helps to offset the not-so-quality-looking grip section. While I may mention it again, later, I am impressed by the look of the Nemosine-branded nibs. Heavily engraved, they carry designs that would seem to be at odds with the look of the pen’s body, yet actually complement it. (The nib features sweeping lines and curls in the etched design.) In the case of the Singularity, simple, classy lines are all it needs to achieve greatness in its looks. 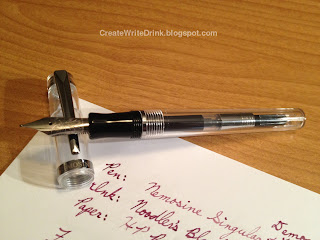 Design/Size/Weight (8)
The one potential design flaw that I spot, immediately, is really just a potential flaw for some people, and I am not one of them. All of the Nemosine nibs are relatively long, and, with how these nibs sit in the section, it may be the case for some that prolonged writing with the grip at such a distance/position becomes uncomfortable, especially for those with small hands. Having the cap screw onto the section, rather than the barrel, was an interesting choice. So far, this has not posed a problem, except, once, when I had the cap screwed on tighter than the barrel (it was after changing the ink). Attempting to unscrew the cap, I, instead, unscrewed the barrel. Where I could see problems, potentially, arising is in the case of an eyedropper conversion (which users on The Fountain Pen Network forum did prove possible).
The grip seems short, because a fifth of the section is threading. However, this does not pose a problem, as the threads have a low enough profile, so that they are comfortable to hold in one’s grip.
Since the only metal on this pen is the nib and accents, it is very light. While perhaps not as light, as a Pilot Penmanship, it is very comfortable to hold. The size in girth is wide enough to be comfortable for a great variety of hand sizes, and the length, unposted, is neither too long or too short for my large hands. As I muse on what more to say, it comes to my mind that this may be one of the most comfortable pens I have ever held.
The two things that I believe could have improved the design of this pen are having the cap screw onto the barrel, rather than the section, and adding just a touch more weight to the pen’s body. While it is not a deal-breaker, I think it would be cool, if Nemosine added their “N” logo to the clip.

Nib (9)
There is so much to say about the nibs. Available Nemosine nibs include extra-fine, fine, medium, 0.6 stub, and 0.8 stub widths. These are all European sizes, and all of them are very smooth and very consistent. The feed allows for a slightly more wet writing experience, but they are as quality, from my experience, as any Lamy Safari nib. Spare nibs are also approximately half of the price of a spare Safari nib, allowing one to try other nib sizes at a lower cost. Unlike Lamy and the typical Pilot nibs, Nemosine nibs and feeds are friction fit without any settings. On one hand, this allows for adjusting how wet/dry the writing experience is, but it may also pose challenges, for the beginner, in changing their nibs. Even though I do not prefer to use them, I am surprised that Nemosine does not make a broad nib. They also do not carry larger stubs, which is unfortunate; however, it is impressive that they do have so many choices. 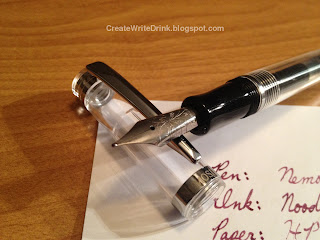 Filling System (9)
The Nemosine Singularity is a standard cartridge converter, taking both long and short, standard international cartridges with room for a second short cartridge, if one is used. The pen comes with a converter that is of good quality and construction. According to members of The Fountain Pen Network forums, the Singularity can also be converted to an eyedropper filling system. The one negative is that, because of how long the nib is, a greater depth of ink is needed, in order to fill the pen by placing the nib end in ink and using the converter.

Cost and Value (9)
For the same price, as this Nemosine Singularity, you could buy some Jinhao pens, some Bülow pens, the Pilot Metropolitan, or multiple, less expensive writing instruments. However, none of the above, except perhaps the Pilot Metropolitan (an excellent pen), could be so widely appealing, as the Singularity. With its many nibs that are readily available (unlike the Pilot Metropolitan), customization options are broad, and the price for one of these fountain pens (15 USD) is a solid sell, so long as the looks appeal to you. 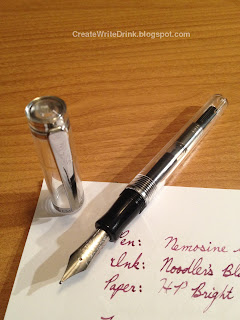 Conclusion (9)
In closing, speaking to the demonstrator version of this pen, I have yet to find any other demonstrators at or below this price point that have the same look of quality or the same versatility of nib sizes.
The brand name of Nemosine has a ways to go, in order to become well-known in the fountain pen world, but their Singularity Demonstrator does an excellent job of promotion.


NOTE: It has been brought to my attention that the nib pictured is not the same as what is mentioned in the review. I swapped to the medium about half way through writing. Additionally, the nibs shown in the pictures on the website, below, are not those which actually come with the Singularity.
The Nemosine Singularity Demonstrator can be purchased from Amazon or from xFountainPens.com, here.

This review was unsolicited and uncompensated.
Posted by Spencer at 10:00 AM