"Pure Chai." Okay, so, right off we can guess that this chai has not been been crafted by a chai being mixed with other flavors. So, as I boil the water to make myself a cup for review, I read the ingredients list and see black tea, cinnamon, cloves...and the words "with natural flavoring." Just why does a "pure" chai need added "natural flavoring?" If any DavidsTea employee reads this and can contribute some knowledge, that would be awesome. (Please leave a comment on this post!) 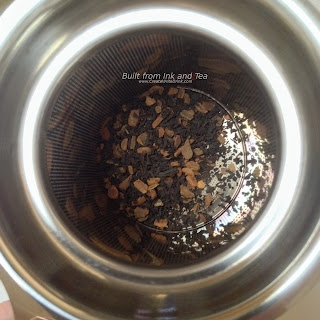 Two teaspoons of tea and twelve ounces of just-boiled water, steeped for four minutes. The packaging suggests four to five minutes, but given that I am using a bit more tea than suggested, and due to the fact that I do not plan to add any milk or sugar, I opt for a shorter steep time.

As a point of interest, DavidsTea no longer sells Pure Chai. They do, however, have nine other teas categorized as chai on their website, including several that are rooibos-based and one that is mate-based. It makes me wonder if "normal" chai simply did not sell well for some reason. 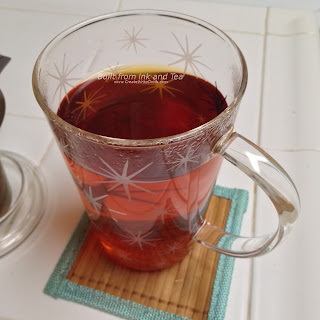 Whereas the dry leaves smelled like an even combination of cinnamon and cloves, the cup of tea smells like cinnamon. Specifically, it smells like cinnamon candies. Hmmm, not quite what I would pick for chai...especially given that this and a bit of black tea is all that it smells like. Flavor-wise...this is really bland. That said, the spices are fine. The cinnamon still tastes strong. The black tea is noticeable. The cloves offer a bit of peppery-ness. Yet...overall this tea tastes like a bland mixture with extra cinnamon to cover over the mediocrity.

I cannot in good conscience recommend this chai. The flavor was so-so. While there are many worse teas out there, including worse chai teas, this one did not offer the richness that I have found in other chai. One would be best to add sugar and milk to this chai, merely to liven it. On my personal enjoyment scale, I would give DavidsTea Pure Chai a 60/100.