A Review of the Levenger True Writer Fountain Pen and a Giveaway! 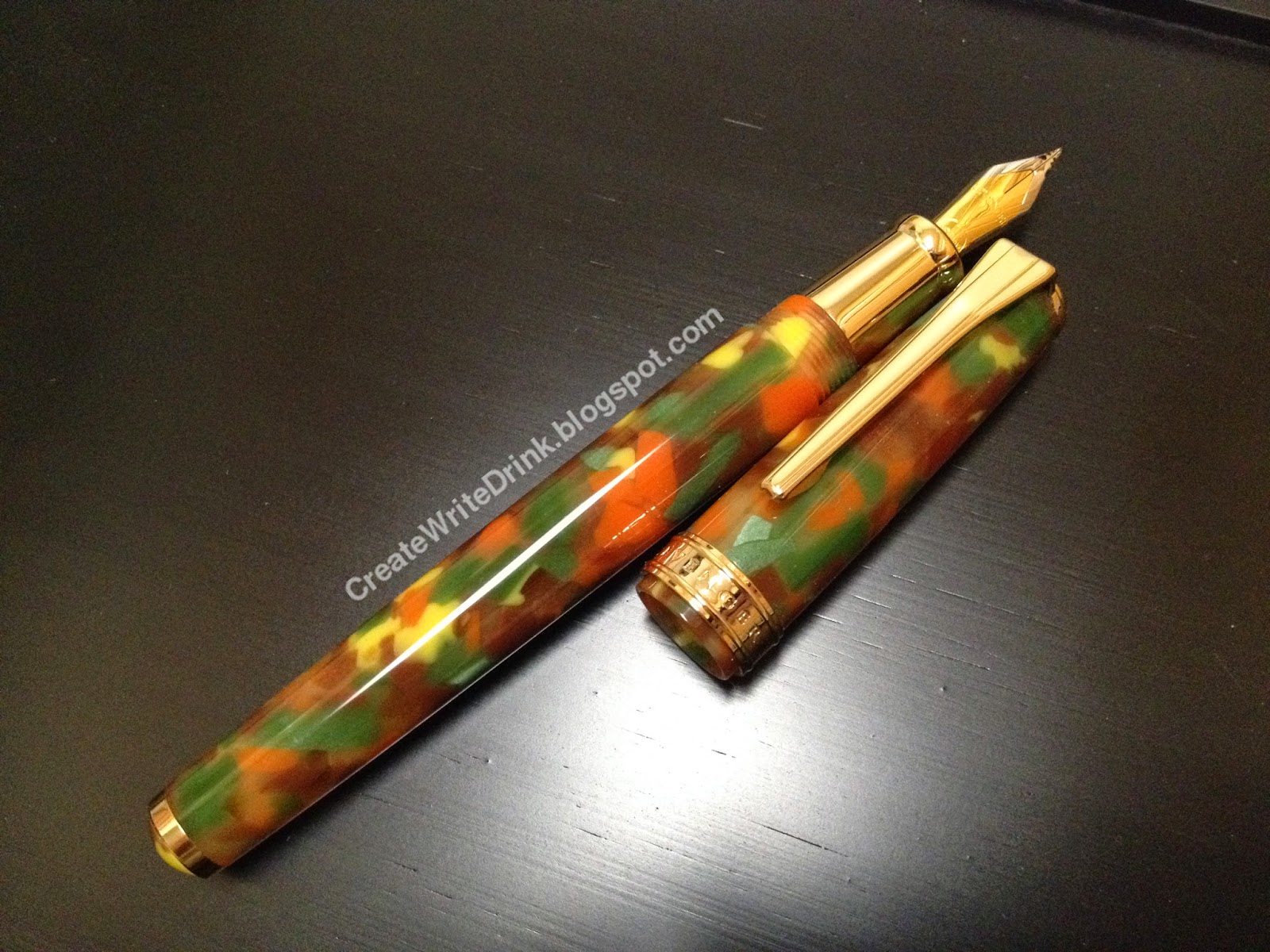 First Impressions (9)
My first impressions of the True Writer are regarding its looks. The pen looks great in person. In fact, the colors are more vibrant than pictures reveal. The trim and the body match quite well. Having looked at the other True Writer colors, online, it would appear that Levenger puts a great deal of time into the color design of their pens.

Uncapping the pen, I immediately think that the gold grip section looks gaudy. It also looks quite short, and I wonder how that will affect performance. 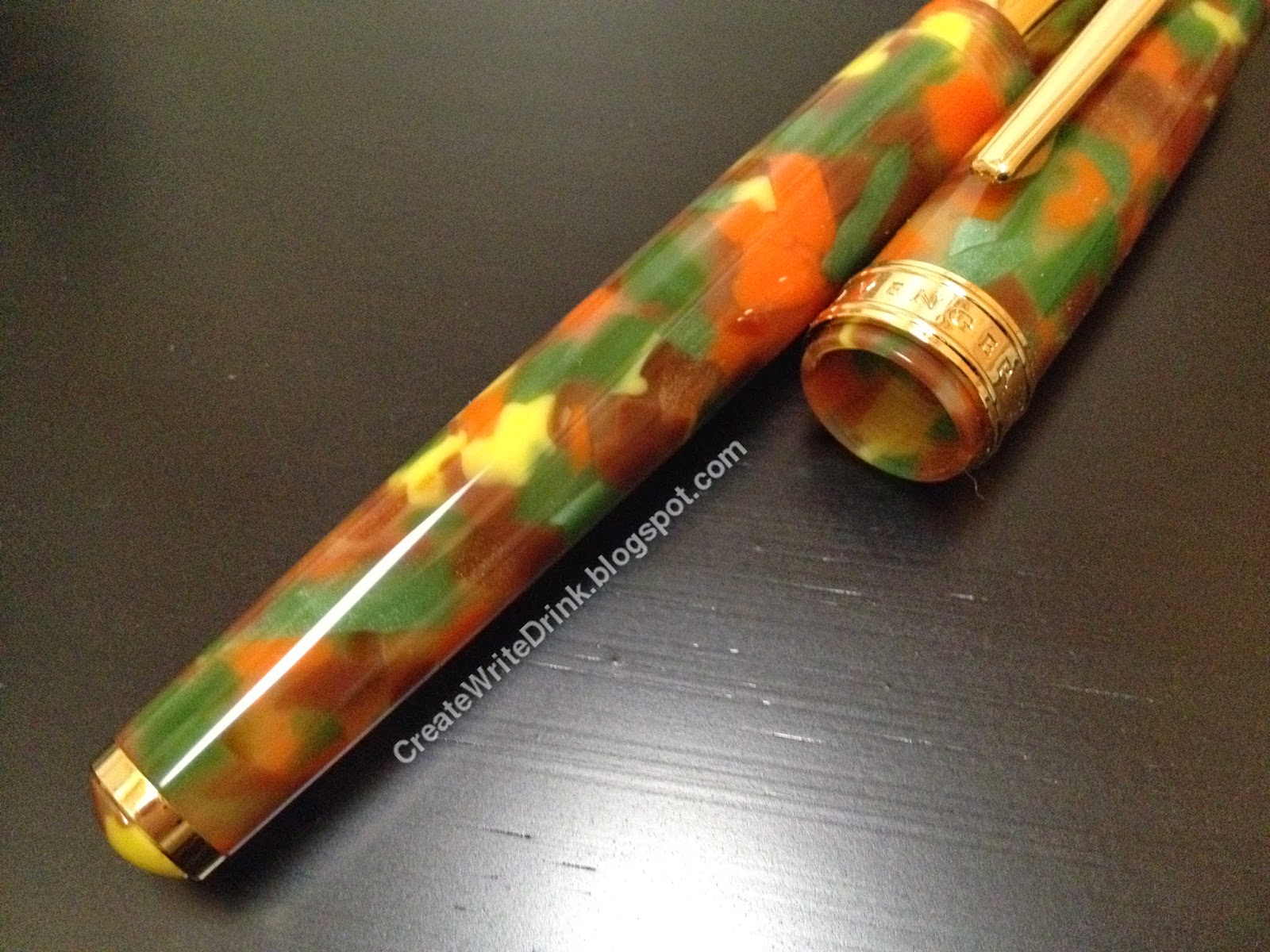 Appearance (9)
Personally, I prefer silver/rhodium/platinum/chrome trims over gold/bronze/copper, etc. However, the gold on the True Writer looks wonderful with the colors. The name of this model is “Foliage,” and the body reminds me of autumn leaves. Yellows, browns, and greens blend with splashes of orange. A few of the color patches also seem to be metallic, making them stand out against the matte patches.

By crafting the cap from the same material as the body, Levenger has minimized the amount of gold on the outside of the pen - a move that I thoroughly support. From the tapered clip (reminiscent of the vintage Esterbrook clips) to the engraved band on the cap, finishing with the band at the end of the barrel, the gold on the outside is just big enough to be noticeable without being too much.

Removing the cap, the notable features are the gold grip and the two-tone nib. As previously mentioned, the gold grip is a bit much in my opinion. A section ring would have been sufficient. I found the use of a two-tone nib to be a bit strange - it is the only non-gold metal on the whole pen. Personal bias about gold aside, this pen is incredibly beautiful. Design/Size/Weight (8)
My first impression of the design tends toward art deco a bit with the gold trim, colors, and especially the clip design. Size-wise, I find the grip a bit small, yet the overall pen length works well in my large hands and would probably be without issue in smaller hands. Uncapped, the pen is of a very moderate length, almost exactly the same length as the TWSBI 530/540/580, comfortable enough to easily use unposted. Oddly, the grip section is fairly short, cause me to partially grip over the threads, yet doing so is not uncomfortable.

It is the weight on this pen, which is most intriguing. By itself, the cap is remarkably end-heavy, so much so that I feel it bears mentioning. The pen, oddly enough, mirrors this weight distribution, as the nib-end of the pen, uncapped, carries significantly more weight than the rear end. The metal section is certainly to blame for this...but it works! With the weight around the nib and not at the other end, the pen feels much more “under control,” while writing, as though it becomes easier to guide the nib across the paper. Overall, I find it to be a nicely-designed pen.

The biggest issue that I see with the design is in the cap threading. Until the cap is completely screwed down, it wiggles quite a bit and turns rather loosely. I could imagine that if the cap were to come unscrewed just a bit, it could easily continue coming unintentionally unscrewed with ease. 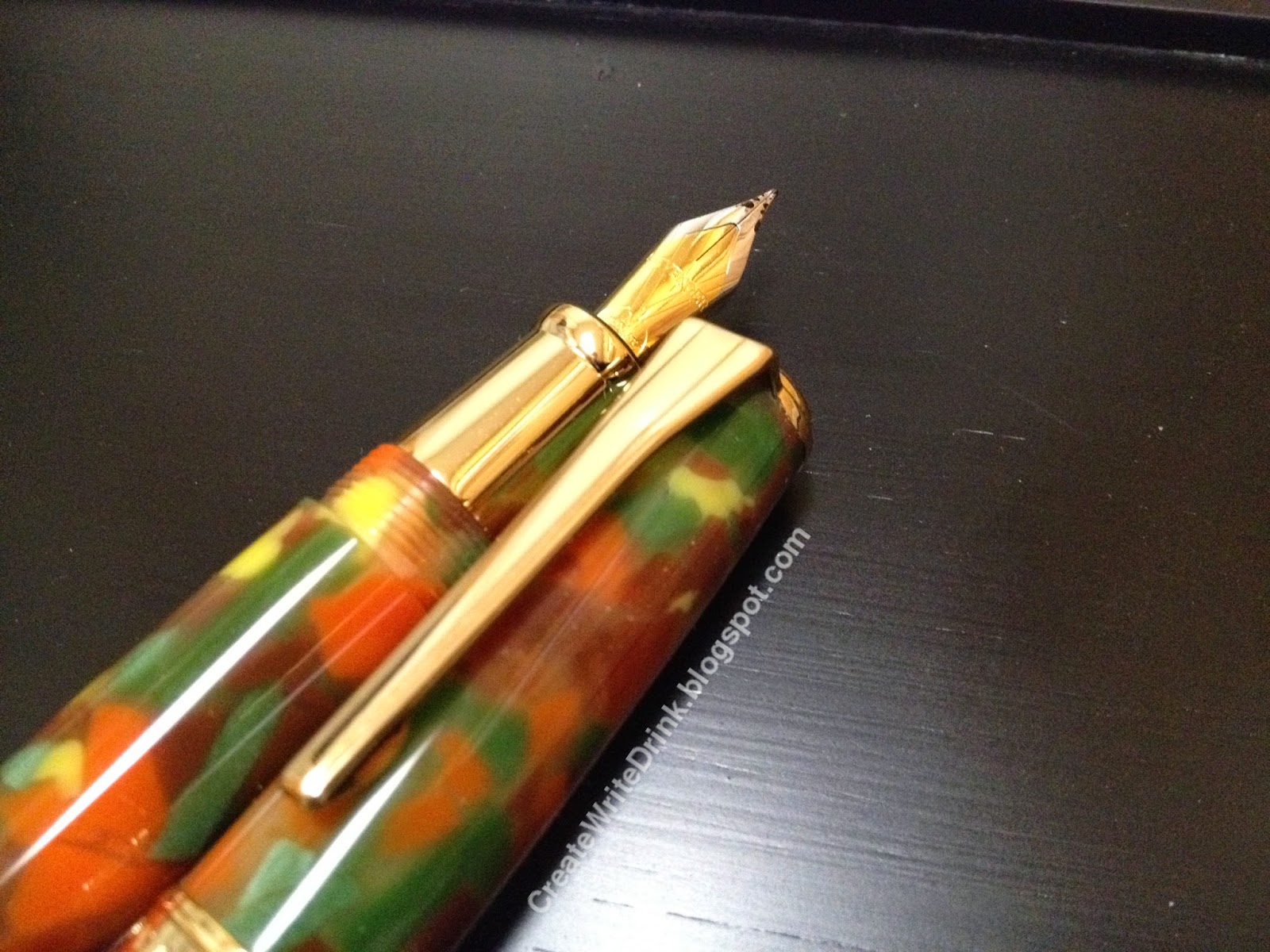 Nib (8)
Medium nibs like this one tend to be relatively easy for nib manufacturers to make smooth, and I imagine that Levenger has pretty good quality control on their nibs. This nib is no exception, and I find that it puts down a solid and consistent western medium line, while allowing for some slight line variation, when the pen is lifted just a bit (e.g. when one lessens the pressure of writing). It is a moderately soft nib, not as firm as a TWSBI (JoWo) nib, but also not approaching flex. A good amount of feedback (though not scratchy) connects the writer to the paper. The size of the nib also complements the size of the pen, quite well, both in length and width of the nib body, itself. 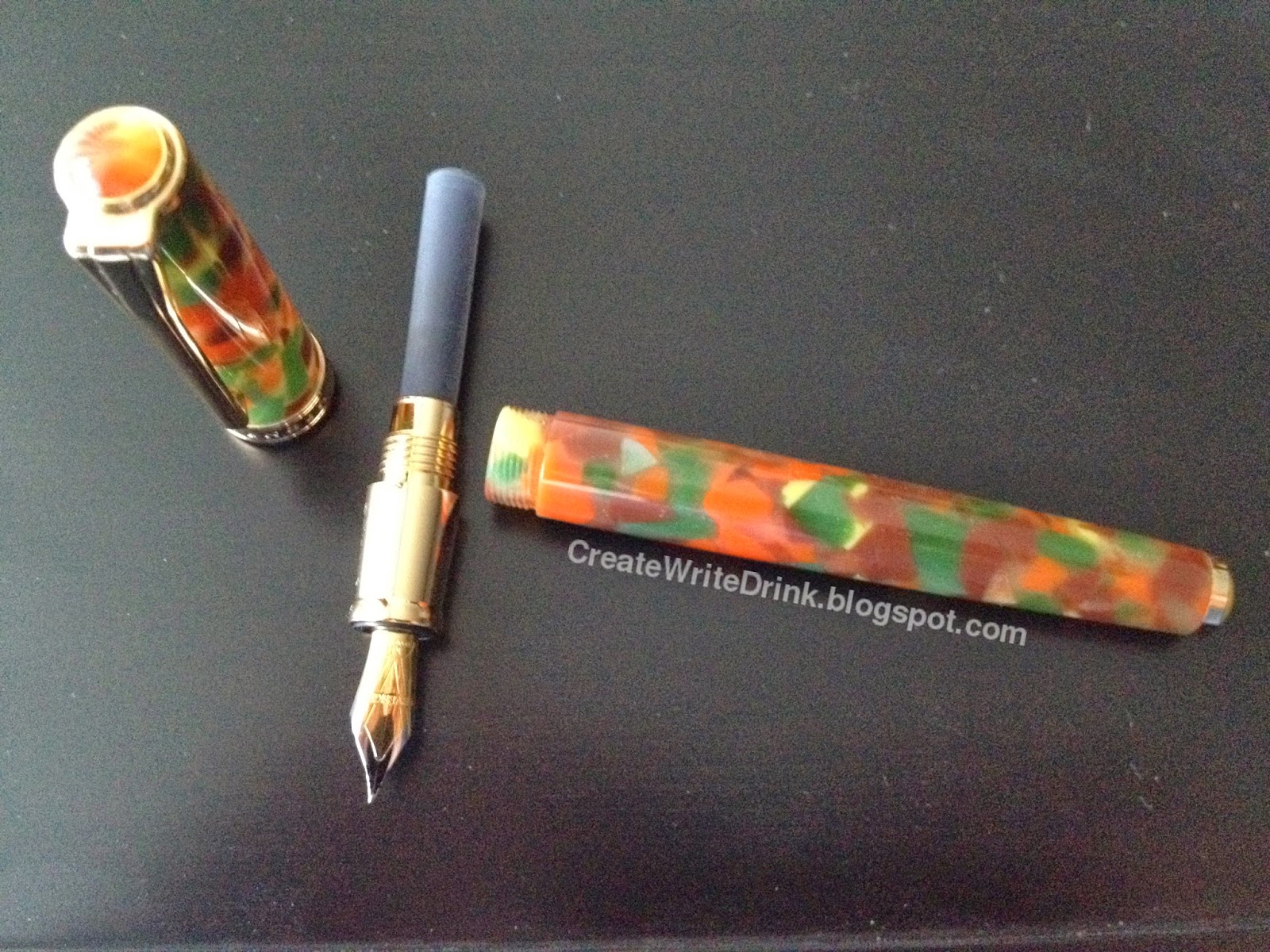 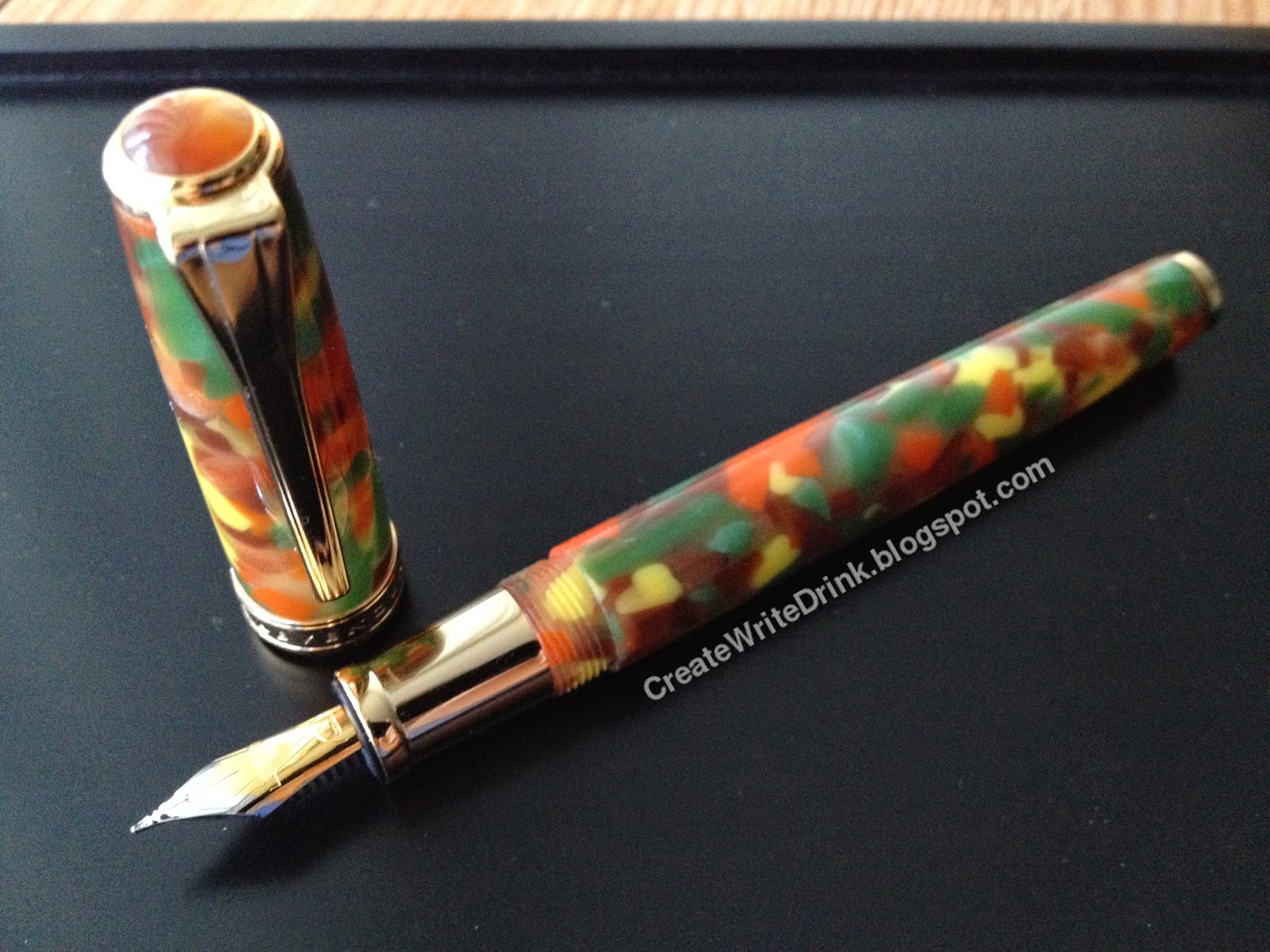 Cost and Value (9)
A solid body, a beautiful design, gold plating, a good nib, and a convenient filling system combine with a sub-100 USD price tag for a fountain pen at a great value. While certainly not entry-level, the Levenger True Writer sits at a price point that makes for a great gift or quality, possibly first, foray into midlevel fountain pens. The looks alone are certain to impress. 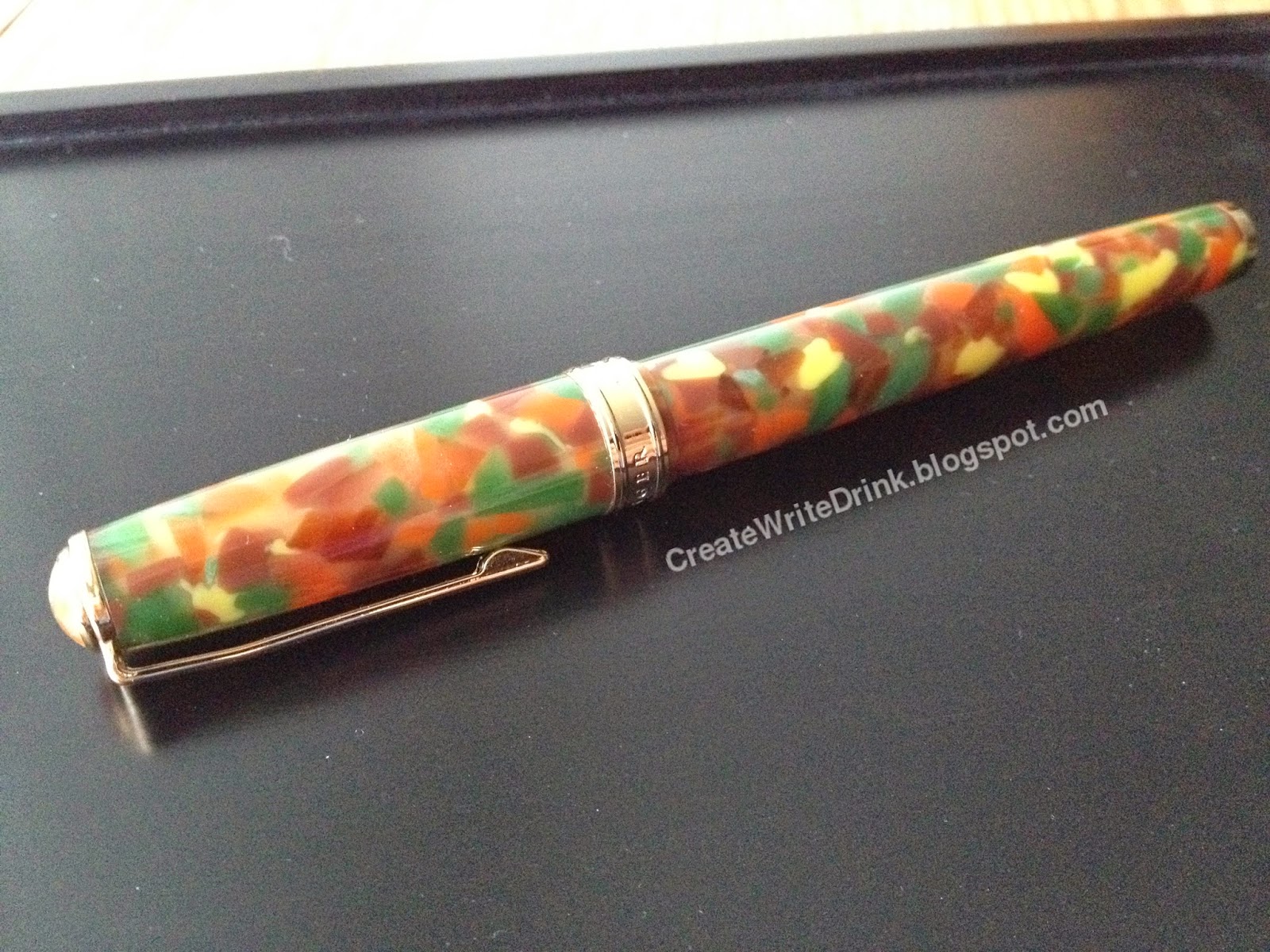 Conclusion (8.5)
In conclusion, I am very impressed by my first experience with a Levenger fountain pen. Levenger appears to have spent a great deal of time and effort on their designs, crafting pens that are visually appeal and write quite well. The Levenger True Writer is an impressive pen and a great value with a large number of color combinations to suit a variety of tastes.

Levenger was kind enough to provide this pen for my review, and a big "thank you" goes out to them for making this review possible. Please pay their site a visit, here. The Levenger True Writer in Foliage can be purchased from their shop, here. I want to share their generosity with the readers of this blog! Enter the contest, below, and you could win this very Levenger True Writer. All you have to do is enter the giveaway through the form and leave a comment on this post, sharing what your current, favorite pen is. (You must use a valid email address.) Additionally entries may be earned by tweeting about the giveaway or following the Built from Ink and Tea Twitter feed, @SpencerCreates. Just use the form, below!

This giveaway is open to domestic and international readers of this blog. (Note that entries for the giveaway close at 12:00 am, PST, on April 13, 2014.)